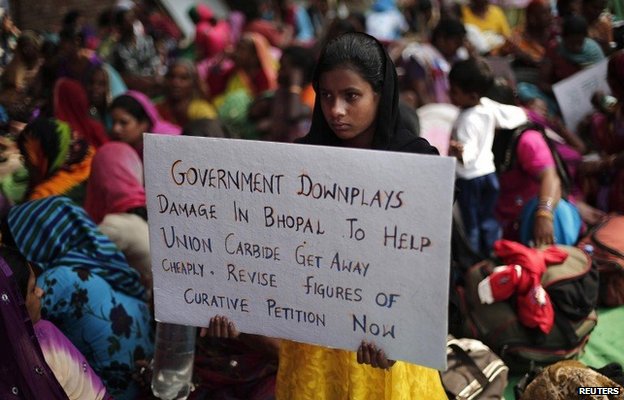 On the night of 2 December 1984, Lakshmi Thakur was putting her children to bed when her eyes started stinging.

She went outside to investigate, thinking a neighbour was frying chillies, and found people running in panic, clutching their faces.

Someone told her there had been an accident at Union Carbide India’s pesticide plant behind her house in Bhopal, the capital of the central state of Madhya Pradesh, and the burning wasn’t from cooking, but from leaking gas.

Lakshmi gathered her family and fled towards a bus stop by the factory. On the way, one of her sons started to vomit and another doubled over with diarrhoea. Her 20-year-old daughter didn’t live to see morning.

More than half a million people were poisoned by deadly methyl isocyanate (MIC) gas that night. Several thousands of them died.

Now nearly 30 years later, Lakshmi is among thousands of survivors who say they suffer chronic health problems and have crippling medical bills.

In early November, she joined hundreds of survivors demanding more compensation in Delhi.

The protesters also wanted the government to revise the number of deaths and injuries it is seeking compensation for from Union Carbide Corporation (UCC) – the US-based owner of Union Carbide India (UCIL) at the time of the accident – and Dow Chemical Company, which acquired UCC in 2001.

On 14 November, Minister for Chemicals and Fertilisers Ananth Kumar agreed to revise the figures and promised survivors who have never received compensation they would get what they were entitled to.

But why are compensation claims dragging on decades after the leak?

A major reason is that the figures of dead and injured are disputed. Activists and government agree the initial settlement was based on incorrect data.

“About 93% of victims were left out of compensation,” said Satinath Sarangi from Bhopal Group for Information and Action, one of five activist groups leading the protest.

But does the fight to get enhanced compensation against Dow and Union Carbide stand a chance?

Many cases have been launched in India and the US calling for Dow to pay compensation to survivors and to clean environmental pollution without success. The multinational argues it was not involved in the tragedy, having purchased UCC 17 years later.

“In legal terms it can be said that the matter has been settled in the highest court of the land, that is the Indian Supreme Court, and Union Carbide or its successors are not liable,” said Warwick University law professor, Dr Upendra Baxi.

Thousands died after inhaling the poisonous gas in December 1984

“I say a successor company, in this case Dow Chemical, just as it overtakes the assets of a company, namely Union Carbide, it also should overtake the liabilities,” Dr Baxi said.

He said courts were basing their decisions on “narrow legalistic grounds”.

The petition should get its first hearing in the next year or so and could result in a different outcome, according to Dr Baxi.

But it may not end compensation claims.

Fresh ones can be launched by those never counted as victims, including children with inherited health problems and those affected by drinking groundwater contaminated by pollution still leaking from the site, Dr Baxi said.

UCC’s then CEO Warren Anderson died in September at the age of 92 as a fugitive in India having never stood trial for criminal charges.

While protesting in Delhi, Krishna Bai’s eyes grew red as she recalled how her sons were blinded by the gas and later died. Left with sight, heart and breathing problems, she got 35,000 rupees ($566; £360) as compensation.

“After 30 years I’m still suffering headaches, I can’t see or walk normally, and the compensation was spent long back,” Krishna Bai said and added, “we won’t stop fighting, we’ll fight to the end.”