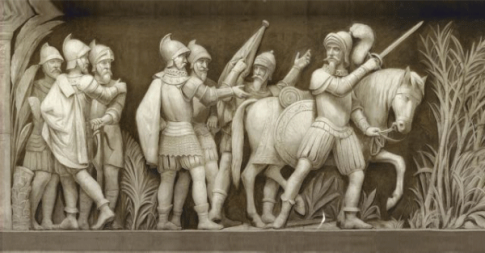 When Francisco Pizarro returned to Spain from the New World in 1528, he told King Charles I of the vast material riches that were found in abundance on Peru’s shores.

He petitioned for permission to conquer the new lands in the name of the crown, and was granted governorship over a vast amount of territory as long as he succeeded in conquering it.

Hungry to get their hands on Incan gold, some 168 Spaniards joined him on the conquest.

In the first battle, the Incans lost 2,000 men while the Spanish lost only 5.

In subsequent battles against the Spaniards, Incan troops were massacred in horrific numbers due in large part to Spain’s technological superiority.

(It also didn’t hurt that the Incan empire was undergoing a civil war at the time.)

The Spaniards would go on to conquer the rest of Incan lands over the next 40 years, which included parts of modern day Argentina, Bolivia, Chile, Colombia, Ecuador and Peru.

And over the next few centuries the Spanish empire would grow to encompass a significant portion of the Americas, some parts of Africa and the East Indies.

Spain was, in fact, the greatest power in Europe during a significant chunk of the renaissance, and she had her overseas dominions to prove it.

How times have changed. Today Spain is in financial straits, and most of her former colonies are in far better economic shape.

And as the gloomy economic landscape in Europe has dried up opportunities for young Spaniards, many have started to look to South America to start new careers.

Between 2008 and 2012 an estimated 700,000 Spaniards have left home in search of greener pastures, choosing to go to places like Colombia, Peru, and Chile.

Unencumbered by a language barrier and without much culture shock, they’re finding that they’re able to rise up the career ladder much more quickly than they could back home.

The shortage of skilled labor and advanced training in these countries means that foreigners are able to obtain higher paying jobs than they could back home.

Some recent college grads find themselves occupying senior level positions after just a few years because there is no one else around qualified for the job.

Even folks who are not with a large corporation or hold an advanced technical degree still have valuable skills.

Just by virtue of being a consumer in the West, for example, you know much more about proper customer service than people in countries that aren’t constantly exposed to such high standards.

I see the same situation in dozens of countries all over the world as I travel. There are many places where local talent and skills simply aren’t catching up fast enough with economic growth.

They are hungry for skilled labor and the entrepreneurially-minded.

This bespeaks a greater trend of our times: some of the best opportunities are abroad. And in uncertain times, you have to carve an independent path to achieve success.

I was always told growing up that if I studied hard and worked my way up the corporate food chain that I’d become successful. Did they tell you that lie too?

That entire premise is fundamentally broken.

But the good news is that it’s never been easier to venture abroad in search of some of the most enticing opportunities out there.

And the transition is not nearly as treacherous as it might seem.

Our ancestors spent months on a boat with a good chance of never coming back. Today we can hop on an airplane and wake up on the other side of the planet.

We can communicate with friends and family with a mouse click. And we can even meet people and conduct research before we arrive.

All the tools and technology exist to make the transition abroad extremely smooth.

It just takes independence of mind to break out of the current mold and embrace the tremendous opportunity you can find overseas.