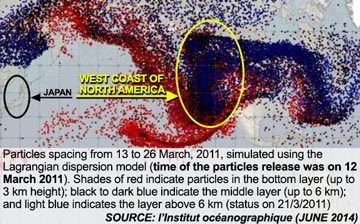 Seattle Post-Intelligencer’s “Big Science Blog” by Jake Ellison, Nov. 13, 2014 (emphasis added): Tiny amount of Fukushima radiation reaches West Coast; does it worry you? A water sample taken in August from about 100 miles west of Eureka, California, has been found to contain a small amount of radiation from the 2011 Fukushima nuclear plant disaster… Basically, scientists say it’s nothing more than a curiosity or confirmation of models… but the rumors and fears surrounding radiation contamination are hard to dampen. This is the second time radiation from Japan has shown up on our shores. In March [2014], we reported: “A bit of cesium-134… has been detected in a soil sample taken from the beach… in British Columbia”

Some may recall that radioactive material from Japan has shown up on the shores of the Pacific Northwest even before March 2014 — actually about 3 years before:

The University of Texas at Austin — Cockrell School of Engineering: The amount of radiation released during the Fukushima nuclear disaster was so great that the level of atmospheric radioactive aerosols in Washington state was 10,000 to 100,000 times greater than normal levels… “I think the conclusion was that this was a really major event here,” said Cockrell School of Engineering Associate Professor Steven Biegalski of the Fukushima disaster… Biegalski was on a faculty research assignment at [Pacific Northwest National Laboratory] in Richland, Wash… “As the measurements came in sooner and at higher concentrations than we initially expected, we quickly came to the conclusion that there were some major core melts at those facilities,” Biegalski said. “I remember being in the lab thinking, ‘Wow, if this is all true we have a far more bigger accident than what we’re hearing right now.”

Washington State Department of Health: Releases from… Fukushima showed that a radiological event can happen anywhere, anytime, and affect conditions thousands of miles from the source.

Nuclear expert Arnie Gundersen interviewed by Alex Smith of RadioEcoshock, Oct. 29, 2014 (at 21:30 in): “We found gardens in Vancouver that had… a clear signature of Fukushima radiation. We’ve seen that as far north as a little bit north of Vancouver, all the way down to Portland, Oregon… So clearly the West Coast was nailed.”

Nuclear expert Arnie Gundersen interviewed by Libbe HaLevy of Nuclear Hotseat, Nov. 12, 2014 (at 44:30 in): “I would expect that as a result of these hot particles that have blown all over Japan and Seattle and Vancouver and Portland… I would expect and increase in lung cancer.”