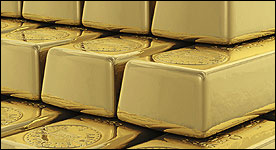 While it remains to be seen if a majority of the Swiss population want their central bank to purchase a whopping 1,500 tons of gold in the coming years, perhaps the most notable event for gold overnight (aside from news that while India exports fell 5% in October, gold and silver imports soared by 280% and 136% Y/Y, respectively), came from ECB Executive Board member Yves Mersch who in a speech in Frankfurt said that the ECB balance-sheet expansion is “neither an end in itself nor a fetish.” As quoted by Bloomberg, the ECB member said that  “the effect on rates that comes along with it is at best a collateral benefit.”

Nothing new here: we have discussed why unlike Japan and the US, the biggest gating factor for Europe is the presence of freely-available, unencumbered collateral that could, at least in theory, be purchased by the ECB. Which brings us to the Mersch punchline: “Theoretically the ECB could purchase other assets such as gold, shares, ETFs to fulfill its promise of adopting further unconventional measures to counter a longer period of low inflation.”

In other words, for the first time ever, the ECB revealed just what the endgame for the Eurozone would looke like: full-blown monetization of virtually everything that is not nailed down. Including gold.

More from Mersch via Bloomberg: “The ECB should allow current stimulus measures to take effect first, then potential new measures must be analyzed in advance for effectiveness and conformity to ECB mandate.” He concluded by saying that “Monetary-policy easing can bring no positive effect if Europe’s economy isn’t structurally well-positioned” through reforms.

Which is ironic because in the same speech the same Mersch also opened a whole new can of worms when he admitted that he is not sure if the BOJ’s QE has worked.

“I’m not so sure it has worked, considering that this morning we saw that Japan has officially slid into recession again.”

Well, it has if one is long of the Nikkei (in Yen or USD terms). For everyone else, it has been an absolute disaster as we previewed early this summer in  Abenomics’ Legacy: Japan’s Greatest “Misery” In 33 Years.

But back to gold. Here is the Telegraph’s take:

Gold, shares, and exchange-traded funds (ETFs) – the European Central Bank (ECB) may turn to buying any or all of these in an attempt to boost inflation in the currency bloc.

Yves Mersch, a member of the ECB’s executive board, said that the purchase of these assets was “theoretically” an option for the central bank, which earlier this year resolved to “take further unconventional measures to counteract a lengthy period of lower inflation”.

His speech, delivered in German, came as official statistics published on Friday showed inflation of just 0.4pc in the year to October.

Very low levels of inflation were characterised by Mr Mersch as “abnormally low”, as price growth remained well below the ECB’s target of close to 2pc.

“Every purchase of a security – or precious metal or foreign currency – naturally increases the credit risk of the buyer”, he added, noting that the ECB may lack a mandate to increase the risk of its balance sheet.

Mr Mersch, a Luxembourgian, is often seen as leaning towards the position of the ECB’s German members – hesitant to pursue monetary stimulus in an attempt to revive the eurozone.

So yes: in “theory” the ECB can buy pretty much anything, up to and including gold. And before all is said and done it most likely will, especially if one looks at today’s GOFO update, where the 6-Month rate remained at a negative -0.0075%, while the 1 Month rate just dropped to a fresh 13 year low, of -0.22%, a fresh low since 2001, suggesting concerns that institutional demand is (and will continue) soaking up all physical for a long, long time. This is how DB carfeully tiptoed around this topic late last week:

It is interesting to note that benchmark gold-dollar swap rates have recently traded negative, meaning investors are paying to borrow gold. This is unusual as gold is traditionally used as a source of collateral for cash financing. While a number of factors may play a role, such as excess dollar liquidity or an increased demand for collateral on the back of the global regulatory developments, it is possible that anticipation of an affirmative vote in the gold referendum has played a role.

In other words, if Switzerland “returns the favor” to the US, whose president recently crushed the legacy banking secrecy prevalent in Switzerland for centuries, and votes to force the purchases of massive amounts of gold in the open, or not so open market, watch as the entire GOFO curve trades negative for the first time ever. 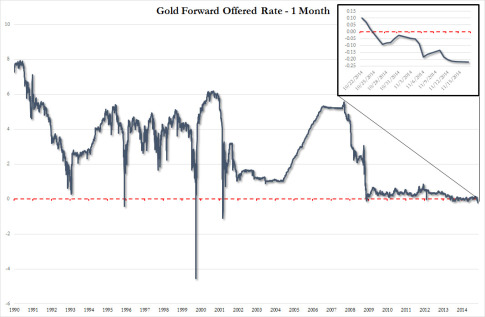