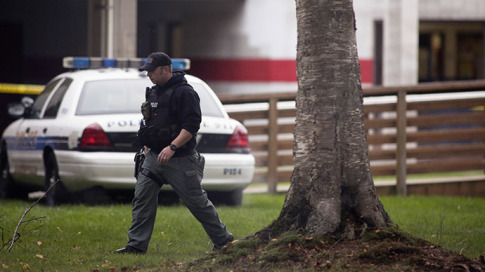 Teachers and students at a Florida middle school got the shock of their lives as an unannounced ‘lockdown active shooter drill’ sparked panic as police burst into classrooms with weapons drawn, drawing sharp criticism from the community.Students at Jewett Middle Academy in Winter Haven, Florida, spoke of the terror they experienced as police officers carried out their ‘active shooter drill’ inside classrooms – without informing teachers ahead of time about the exercise.

Lauren Marionneaux, a seventh-grader, told WTVT-TV that when the police officers crashed into her classroom with weapons drawn, she immediately imagined the worst.

“A lot of people started getting scared because we thought it was a real drill,” Lauren said. “We actually thought that someone was going to come in there and kill us.”

Later, school officials sent an email to inform parents about the drill, which was compared to fire drills that schools regularly conduct.

“Parents, students and staff are typically not notified about lockdown drills. For example, we do not give advanced notice of fire drills in order to evaluate how safety procedures work…We regret any concern that parents and students might have experienced in how the drill was conducted,” the letter stated.

But for many parents, however, receiving a letter from school officials after the fact was unacceptable.

Stacy Ray, whose daughter texted her during the police exercise, said she believed the school was experiencing a real live shooting.

“I’m panicking because I’m thinking that it’s a legitimate shooter coming, that something bad is happening at the school,” Ray told Fox 13. The video below shows police officers in an ‘active shooter exercise’ in the state of Massachusetts.

“It’s very scary, especially from a parent’s perspective,” Ray said. “You hear all this horrible stuff on the news and you think it might be happening at your child’s school.”

Jason Geary, a spokesperson for Polk County Schools, called it “standard procedure” for such drills to occur without informing parents, students or teachers.

“These types of drills are vital in order to evaluate not only law enforcement response, but more importantly to educate the students and school officials in case an actual event were to occur,” Chief Charlie Bird said in an email to media.

“How you train and how you prepare is how you’re going to react when everything goes bad.”

“It really is to protect the children and at no point in time would we endanger any of the children,” Bird stated.

Following the outpouring of criticism from teachers and parents, Winter Haven police said they had “evaluated procedures” for such drills and decided to change their tactics.

“Further lock-down drills that occur at schools within the city limits of Winter Haven will be performed by uniformed officers without weapons,” the department said in a press release.

The police gave no indication, however, if they would inform students, parents and teachers about the ‘active shooter drills’ in advance.