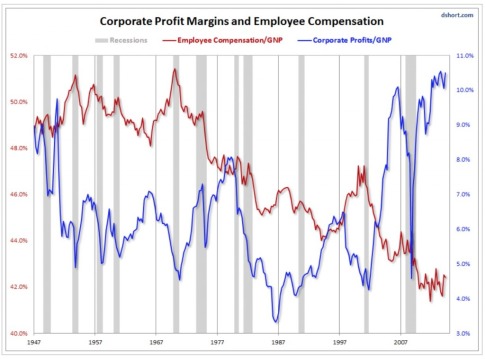 I got this from Naked Capitalism. Before presenting the chart, here are some words to bear in mind from Yves Smith:

Short omits some key elements from his discussion. One is that until recently, a profit share of GDP of 6% was perceived to be a cyclical peak; no less than Warren Buffet deemed a higher level to be unsustainable. And in fact, we see an explosion of profit share from 6% to 10% of GDP in the runup to the crisis, roughly from 2003 to 2007. The “rescue the banks and financial markets” measures succeeded in bringing the profit share back to its pre-crisis levels, at the expense of workers.

Notice the inflection point in profit share is 1987, when Greenspan became Fed chairman. Correlation may not be causation, but the timing is almost exact.