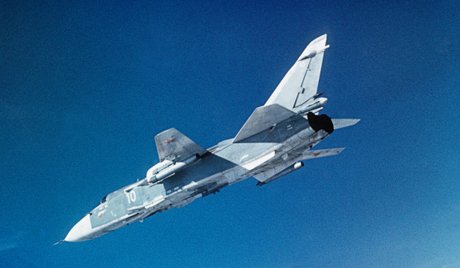 Russian Sukhoi Su -24 with the newest jamming complex paralyzed in the Black Sea the most modern American combat management system “Aegis” installed on the destroyer “USS Donald Cook”. Pavel Zolotarev, Deputy Director, Institute of USA and Canada, shares details about this version which is being actively discussed in the Russian media and by bloggers.

US destroyer “Donald Cook” with cruise missiles “Tomahawk” entered the neutral waters of the Black Sea on April 10. The purpose was a demonstration of force and intimidation in connection with the position of Russia in Ukraine and Crimea. The appearance of American warships in these waters is in contradiction of the Montreux Convention about the nature and duration of stay in the Black Sea by the military ships of countries not washed by this sea.

In response, Russia sent an unarmed bomber Su- 24 to fly around the U.S. destroyer. However, experts say that this plane was equipped with the latest Russian electronic warfare complex. According to this version, “Aegis” spotted from afar the approaching aircraft, and sounded alarm. Everything went normally, American radars calculated the speed of the approaching target. And suddenly all the screens went blank. “Aegis” was not working any more, and the rockets could not get target information. Meanwhile, Su-24 flew over the deck of the destroyer, did battle turn and simulated missile attack on the target. Then it turned and repeated the maneuver. And did so 12 times.

Apparently, all efforts to revive the “Aegis” and provide target information for the defence failed. Russia’s reaction to military pressure from the United States was profoundly calm, feels the Russian political scientist Pavel Zolotarev:

The demonstration was original enough. A bomber without any weapons, but having onboard equipment for jamming enemy radar, worked against a destroyer equipped with “Aegis”, the most modern system of air and missile defence. But this system of mobile location, in this case the ship, has a significant drawback. That is, the target tracking capabilities. They work well when there is a number of these ships which can coordinate with each other somehow. In this case there was just one destroyer. And, apparently, the algorithm of the radar in the “Aegis” system on the destroyer did not load under the influence of jamming by the Su-24. It was therefore not only a nervous reaction to the fact of flying around by the Russin bomber which was common practice during the Cold War. The reaction of the Americans was due to the fact that most modern system, especially its informative or radar part, did not work adequately. Therefore, there was such a nervous reaction to the whole episode.

After the incident, the foreign media reported that “Donald Cook” was rushed into a port in Romania. There all the 27 members of the crew filed a letter of resignation. It seems that all 27 people have written that they are not going to risk their lives. This is indirectly confirmed by the Pentagon statement according to which the action demoralized the crew of the American ship.

What are the possible consequences of the incident provoked by the U.S. in the Black Sea? Pavel Zolotarev forecasts:

I think that Americans are somehow going to reflect on improving the system “Aegis”. This is a purely military aspect. In political terms, there is hardly any likelihood of demonstrative steps by either side. That is enough. Meanwhile, for Americans it is a very unpleasant moment. In general, the missile defence system which they deploy involves huge expenditures. They have to prove each time that it is necessary to allocate funds from the budget. At the same time, the ground component of the ABM was tested in ideal conditions and showed a low efficiency. This fact is concealed by the Pentagon. The most modern component, the sea-based system “Aegis” also showed its shortcomings in the present case.

The system with which the Russian Su-24 shocked the American destroyer “Donald Cook” has the code name “Khibiny”. This is the name of the mountain range on the Kola Peninsula in the Arctic Circle. “Khibiny” is the newest complex for radioelectronic jamming of the enemy. They will be installed on all the advanced Russian planes .

Recently the complex has undergone regular testing exercises on the ground in Buryatia. Apparently, the tests which were conducted under conditions as close to real as possible, were successful.