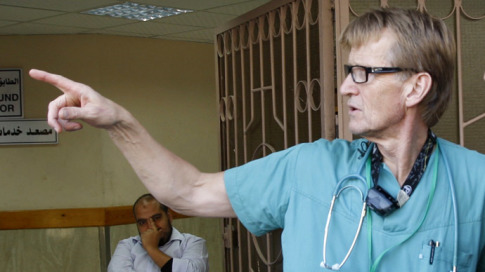 Israel has banned Mads Gilbert, a Norwegian doctor who has helped Palestinians during conflicts for over 30 years, from entering Gaza, following his outspoken criticism of the Israeli government. Oslo has asked Jerusalem to reverse the decision.

“I was asked by the Norwegian authorities to go down to continue working in Gaza. When we arrived at the Erez Crossing, I was told by Israeli soldiers that I could not go into Gaza. I had to turn back to Norway,” said the 67-year-old, who was attempting to return to the region for the first time since the end of Israel’s Gaza offensive, which ended in August, as reported by Norway’s VG newspaper.

“I have never broken any Israeli laws. It’s provocative, unreasonable and totally unacceptable.”

After Gilbert was turned back last month, the Norwegian embassy wrote to Israeli officials, but received “security reasons” as the only justification for the entry ban. Norwegian officials say Israel is “unlikely” to retract its decision.

“From the Norwegian perspective, we have raised Gilbert’s exclusion from Gaza and asked Israel to change their decision. The humanitarian situation in Gaza is still difficult and there is a need for all health workers.”

Gilbert, who says he has treated about 11,000 Palestinians since first traveling to the region in 1981, hit the spotlight when he became an articulate spokesman for Palestinians during Operation Cast Lead in 2008, when most Western journalists were not allowed to enter the territory. He gained notoriety in Israel after co-authoring a highly-critical open letter about the country, which was published in the respected medical journal, Lancet, in July, at the height of the latest conflict, in which more than 2,100 were killed.

“Israel’s attacks aim to terrorize, wound the soul and the body of the people, and make their life impossible in the future, as well as also demolishing their homes and prohibiting the means to rebuild,” said one excerpt.

“We register with dismay that only 5 percent of our Israeli academic colleagues signed an appeal to their government to stop the military operation against Gaza. We are tempted to conclude that with the exception of this 5 percent, the rest of the Israeli academics are complicit in the massacre and destruction of Gaza.”

The letter caused outrage in Israel when it was discovered that two of the authors, though not Gilbert, had publicly shared an anti-Semitic video by white supremacist David Duke. Lancet editor Richard Horton later said he “deeply regretted” the “polarization” that resulted from the publication of a largely political document in a scientific magazine.

But Gilbert, a lifetime member of Norway’s hard-left Red Party, who has worked at the University Hospital of North Norway in Tromso since 1976, has been an outspoken critic of Israel, accusing it of “occupation” and “apartheid.” He also criticized the US, claiming that “the oppressed has [sic] a moral right to attack the US with the weapons they may create” in the wake of the 9/11 attacks. Israeli officials have referred to him as a Jekyll and Hyde figure, for his combination of philanthropy and fiery rhetoric.Gilbert himself says that he has no regrets over his words about the latest conflict, and has just released a harrowing “testimony” of his stint in Gaza earlier this year.

“When the pen, camera and stethoscope are a security threat, we are facing a regime that fears only one thing: the truth,” he told VG.