– ISIS Unveils Its New Gold-Backed Currency To Remove Itself From “The Oppressors’ Money System” (ZeroHedge, Nov 13, 2014):

It appears the rumors are true. Islamic State is set to become the only ‘state’ to back its currency with gold (silver and copper) as it unveils the new coins that will be used in an attempt to solidify its makeshift caliphate. ISIS says the new currency will take the group  out of “the oppressors’ money system.” 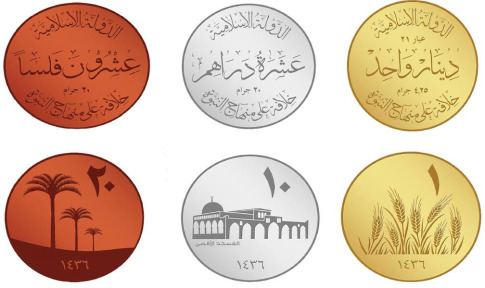 #Iraq | #ISIS says the new currency will take the group out of “the oppressors money system” pic.twitter.com/4S4GcM86Jk

“Remember
what we’re looking at. Gold is a currency. It is still, by all
evidence, a premier currency. No fiat currency, including the dollar,
can match it.”

Of course this will mean more physical demand – along with Russia and China – and so more price suppression by the West.