While it is unclear if moments ago the Mississippian Lime Play under south Kansas was the first major shale quake to hit Kansas, or this was simply the first yet to be named shale company going Chapter 11, but moments ago the USGS reported that a 4.8 quake located 30 miles SSW of Wichita as well as a various other smaller quakes in north Oklahoma,shook the two states. 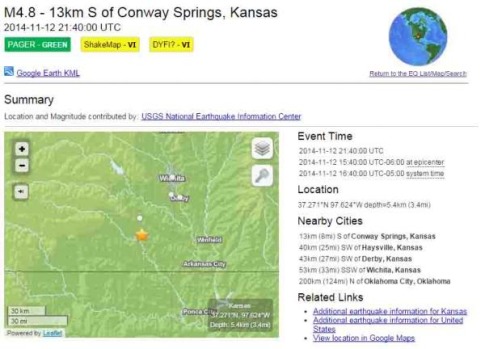 KWCH has received numerous reports of an earthquake felt throughout the state.

The U.S. Geological Survey has confirmed the epicenter of the quake as 8 miles south of Conway Springs, Kansas.

The earthquake was felt near Haysville, Derby, Wichita, and Oklahoma City.

So far, there have been no reports of damage or injuries due to this earthquake.

That said, it will likely take a few more, substantially stronger frackquakes in shale regions, before the popular mood turns against America’s shale revolution which has been blamed – in Ohio and elsewhere- on an increased incidence of tremors.