“The rise of the machines….” 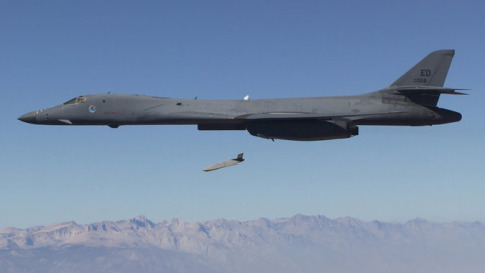 A Long Range Anti-Ship Missile prototype, launched by a B-1 bomber, is designed to maneuver without human control (DARPA)

On a bright fall day last year off the coast of Southern California, an Air Force B-1 bomber launched an experimental missile that may herald the future of warfare.

Initially, pilots aboard the plane directed the missile, but halfway to its destination, it severed communication with its operators. Alone, without human oversight, the missile decided which of three ships to attack, dropping to just above the sea surface and striking a 260-foot unmanned freighter.

Warfare is increasingly guided by software. Today, armed drones can be operated by remote pilots peering into video screens thousands of miles from the battlefield. But now, some scientists say, arms makers have crossed into troubling territory: They are developing weapons that rely on artificial intelligence, not human instruction, to decide what to target and whom to kill.

As these weapons become smarter and nimbler, critics fear they will become increasingly difficult for humans to control — or to defend against. And while pinpoint accuracy could save civilian lives, critics fear weapons without human oversight could make war more likely, as easy as flipping a switch.

1 thought on “Fearing Bombs That Can Pick Whom to Kill”