Currency markets are massively rigged. And see this and this.

Regulators fined six major banks including Citigroup (C.N) and UBS (UBSN.VX) a total of $4.3 billion for failing to stop traders from trying to manipulate the foreign exchange market, following a year-long global investigation.

HSBC (HSBA.L), Royal Bank of Scotland (RBS.L), JP Morgan (JPM.N) and Bank of America (BAC.N) also face penalties resulting from the inquiry that has put the largely unregulated $5 trillion-a-day market on a tighter leash, accelerated the push to automate trading and ensnared the Bank of England.

In the latest scandal to hit the financial services industry, dealers shared confidential information about client orders and coordinated trades to make money from a foreign exchange benchmark used by asset managers and corporate treasurers to value their holdings. Dozens of traders have been fired or suspended.

Britain’s Financial Conduct Authority (FCA) fined five lenders $1.77 billion, the biggest penalty in the history of the City of London, and the U.S. Commodity Futures Trading Commission (CFTC) ordered them to pay a further $1.48 billion.

The U.S. Office of the Comptroller of the Currency, which regulates banks, also fined the U.S. lenders $950 million and was the only authority to penalise Bank of America.

Gold and Silver Are Manipulated

Gold and silver prices have been “fixed” in daily conference calls by the powers-that-be.

It is the participating banks themselves that administer the gold and silver benchmarks. 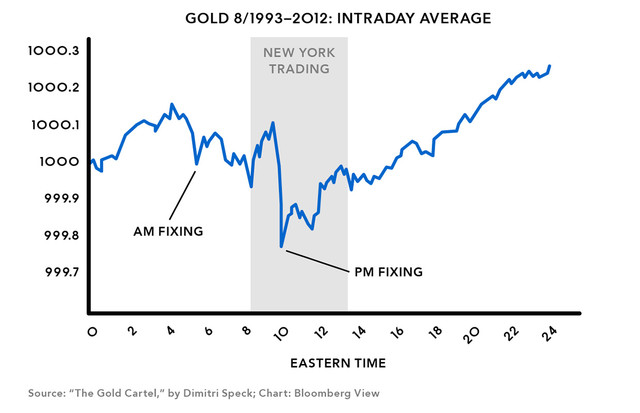 So are prices being manipulated? Let’s take a look at the evidence. In his book “The Gold Cartel,” commodity analyst Dimitri Speck combines minute-by-minute data from most of 1993 through 2012 to show how gold prices move on an average day (see attached charts). He finds that the spot price of gold tends to drop sharply around the London evening fixing (10 a.m. New York time). A similar, if less pronounced, drop in price occurs around the London morning fixing. The same daily declines can be seen in silver prices from 1998 through 2012. 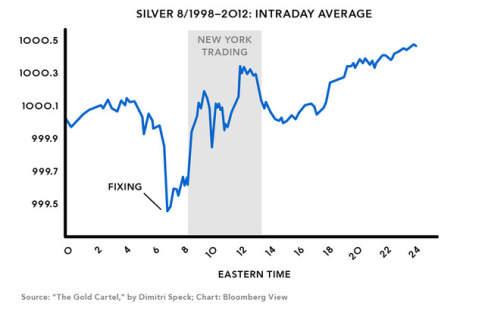 For both commodities there were, on average, no comparable price changes at any other time of the day. These patterns are consistent with manipulation in both markets.

Runaway derivatives – especially credit default swaps (CDS) – were one of the main causes of the 2008 financial crisis. Congress never fixed the problem, and actually made it worse.

Indeed, many trillions of dollars of derivatives are being manipulated in the exact same same way that interest rates are fixed (see below) … through gamed self-reporting.

A Manhattan federal judge said on Thursday that investors may pursue a lawsuit accusing 12 major banks of violating antitrust law by fixing prices and restraining competition in the roughly $21 trillion market for credit default swaps.

“The complaint provides a chronology of behavior that would probably not result from chance, coincidence, independent responses to common stimuli, or mere interdependence,” [Judge] Cote said.

Other defendants are the International Swaps and Derivatives Association and Markit Ltd, which provides credit derivative pricing services.

U.S. and European regulators have probed potential anticompetitive activity in CDS. In July 2013, the European Commission accused many of the defendants of colluding to block new CDS exchanges from entering the market.

“The financial crisis hardly explains the alleged secret meetings and coordinated actions,” the judge wrote. “Nor does it explain why ISDA and Markit simultaneously reversed course.”

In other words, the big banks are continuing to fix prices for CDS in secret meetings … and have torpedoed the more open and transparent CDS exchanges that Congress mandated.

Royal Bank of Scotland Group Plc was ordered to pay $50 million by a federal judge in Connecticut over claims that it rigged the London interbank offered rate.

Global investigations into banks’ attempts to manipulate the benchmarks for profit have led to fines and settlements for lenders including RBS, Barclays Plc, UBS AG and Rabobank Groep.

RBS was among six companies fined a record 1.7 billion euros ($2.3 billion) by the European Union last month for rigging interest rates linked to Libor. The combined fines for manipulating yen Libor and Euribor, the benchmark money-market rate for the euro, are the largest-ever EU cartel penalties.

Global fines for rate-rigging have reached $6 billion since June 2012 as authorities around the world probe whether traders worked together to fix Libor, meant to reflect the interest rate at which banks lend to each other, to benefit their own trading positions.

To put the Libor interest rate scandal in perspective:

The U.S. Federal Energy Regulatory Commission says that JP Morgan has massively manipulated energy markets in California and the Midwest, obtaining tens of millions of dollars in overpayments from grid operators between September 2010 and June 2011.

Oil prices are manipulated as well.

The big banks and government agencies have been conspiring to manipulate commodities prices for decades.

The big banks are taking over important aspects of the physical economy, including uranium mining, petroleum products, aluminum, ownership and operation of airports, toll roads, ports, and electricity.

And they are using these physical assets to massively manipulate commodities prices … scalping consumers of many billions of dollars each year. More from Matt Taibbi, FDL and Elizabeth Warren.

Everything Can Be Manipulated through High-Frequency Trading

Traders with high-tech computers can manipulate stocks, bonds, options, currencies and commodities. And see this.

The big banks and other giants manipulate numerous markets in myriad ways, for example:

The experts say that big banks will keep manipulating markets unless and until their executives are thrown in jail for fraud.

Why? Because the system is rigged to allow the big banks to commit continuous and massive fraud, and then to pay small fines as the “cost of doing business”. As Nobel prize winning economist Joseph Stiglitz noted years ago:

“The system is set so that even if you’re caught, the penalty is just a small number relative to what you walk home with.

The fine is just a cost of doing business. It’s like a parking fine. Sometimes you make a decision to park knowing that you might get a fine because going around the corner to the parking lot takes you too much time.”

Switzerland’s regulator FINMA ordered UBS, the country’s biggest bank, to pay 134 million francs ($139 million) after it found serious misconduct in both foreign exchange and precious metals trading. It also capped bonuses for dealers in both units at twice their basic salary for two years.

Capping bonuses at twice base salary?  That’s not a punishment … it’s an incentive.

Experts say that we have to prosecute fraud or else the economy won’t ever really stabilize.

But the government is doing the exact opposite. Indeed, the Justice Department has announced it will go easy on big banks, and always settles prosecutions for pennies on the dollar (a form of stealth bailout. It is also arguably one of the main causes of the double dip in housing. And there is no change in the air.)

Indeed, the government doesn’t even force the banks to admit any guilt as part of their settlements.  In fact:

And they will keep on doing so until the Department of Justice grows a pair.

The criminality and blatant manipulation will grow and spread and metastasize – taking over and killing off more and more of the economy – until Wall Street executives are finally thrown in jail.