“They are building stuff that nobody really wants or needs… and there will be a day of reckoning” sums up yet another mega ghost city project under development in China. As NBC News reports, China’s $50-billion knock-off of the Big Apple – near the port city of Tianjin, some 120 miles from Beijing – complete with its own Rockefeller Center and Twin Towers has been billed as the world’s largest financial center in the making. But this Manhattan still has a long way to go…

China’s $50-billion knock-off of the Big Apple sits on a river bend — much like its namesake — near the port city of Tianjin, some 120 miles from Beijing. Complete with its own Rockefeller Center and Twin Towers, it’s been billed as the world’s largest financial center in the making. But this Manhattan still has a long way to go.

A recent visit shows that construction that began in 2008 on the back of a massive credit boom unleashed in China after the global financial crisis appears to have ground to a halt. While the stunted version of “Rockefeller Center” and its Twin Towers appeared to be complete — both were empty and fenced off.

“It’s the financial crisis. The impact is big,” said one man on the site who preferred not to be identified but said he worked for a transportation company. “I think there are still working on a building over there,” he added, pointing down a wide and empty highway, strewn with litter.

It was scheduled for completion in 2019, offering 164 million square feet of office space over an area larger than Manhattan’s financial district in a bid to stimulate development of vast residential districts nearby.

“They are building stuff that nobody really wants or needs — and there will come a day of reckoning,” explained Gillem Tulloch, a Hong Kong-based analyst and managing director of GMT Research who has studied the growth of China’s “ghost cities” across the country.

“Our leading economists in the West were lauding the Soviet-style system from the 1950s up until the 1980s,” he said. “They were all wrong. I think it’s the same with China.” 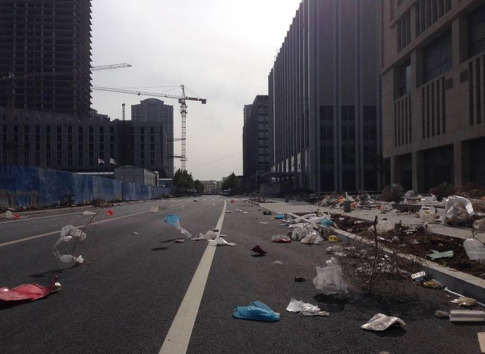 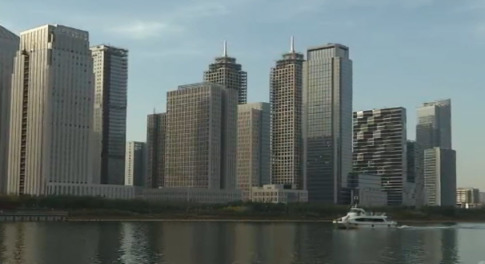