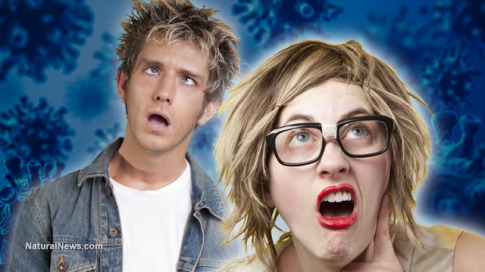 – Real science: Almost half the population may be infected with a mysterious virus that makes people stupid (Natural News, Nov 11, 2014):

Scientists at Johns Hopkins Medical School have identified a mysterious virus that literally makes people stupid, and it has so far been found in about 45% of the people tested.

The discovery of the “stupid” virus, normally found in algae, was revealed at the Proceedings of the National Academy of Sciences. The study, entitled “Chlorovirus ATCV-1 is part of the human oropharyngeal virome and is associated with changes in cognitive functions in humans and mice” is found at this link on the PNAS.org website.

The rather shocking take away from the study is that the virus alters the gene expression of brain cells, literally making people perform more poorly on cognitive tests, visual processing and spatial awareness.

According to the study abstract, the virus alters gene expression relating to “…synaptic plasticity, learning, memory formation, and the immune response to viral exposure.”

This virus, in other words, can truly suppress your brain function, memories and immune response. And it is apparently quite common in humans.

Fascinatingly, this discovery makes tremendous sense. Have you ever looked at the world around you and wondered why so many people seem intellectually challenged? Now we know that a virus really can alter the function and expression of your brain cells.

At last, there is a scientific explanation that backs up our observations of other people. Half the population may indeed be infected with the “stupid” virus, altering their cognition, memories and awareness. And if this virus alone isn’t enough to get the job done, there’s always fluoride in the water, brain-damaging mercury in the flu shots, and reality TV shows that are so dumbed down they actually suck your brain cells into the plasma screen vortex.

This virus, in fact, may be crucial to powering the U.S. economy because people infected with it create economic activity by spending money on lottery tickets, cell phone insurance and synthetic children’s vitamins laced with aspartame. Without the aid of this virus, much of the economy would grind to a halt and sales of popular sports drinks would collapse to almost nothing.

The next time someone accuses you of doing something stupid, just reply with, “Hey, I got infected with the stupid virus. But what’s YOUR excuse?”

A virus, previously thought to live only in algae in rivers and lakes, has been found in the throats of healthy people. The infected showed specific brain activities to be slower than of those without the virus.

The study outlining the discovery was carried out by Scientists at the Johns Hopkins Medical School and the University of Nebraska (UNL) and published in the Proceedings of the National Academy of Sciences (PNAS) journal in October.

The scientists were busy with another study, when they found the DNA of the chlorovirus Acanthocystis turfacea chlorella virus 1 (ATCV-1) in the throats of humans. According to the study, such chloroviruses as ATCV-1 have not been previously shown to infect humans or to be part of the human virome.

Following a series of tests, scientists found that out of the 92 healthy people 40 infected with the virus. Moreover, those infected performed 10 percent worse in tests requiring visual processing.

For example, people with the virus scored about nine points lower on a test that measured how quickly they could draw a line between sequentially numbered circles on a piece of paper and seven points lower on tests measuring attention.

“This is a striking example showing that the ‘innocuous’ microorganisms we carry can affect behavior and cognition,” said lead investigator Robert Yolken, director of the Stanley Neurovirology Laboratory at Johns Hopkins, according to the UNL press-release.

“Many physiological differences between person A and person B are encoded in the set of genes each inherits from parents, yet some of these differences are fueled by the various microorganisms we harbor and the way they interact with our genes.”

Animals infected with the virus exhibited similar difficulties, scientists said. For example, mice who harbored the virus found it more difficult to navigate a maze and spent 30 percent less time – much less attention – examining a new object than healthy mice.

“The similarity of our findings in mice and humans underscores the common mechanisms that many microbes use to affect cognitive function in both animals and people,” said co-investigator Mikhail Pletnikov, MD, PhD, director of the Behavioral Neurobiology and Neuroimmunology Laboratory at Johns Hopkins.

Chloroviruses, which effect certain green microalgae, are common worldwide, said senior author of the study James Van Etten, William Allington Distinguished Professor of Plant Pathology and a co-director of the Nebraska Center for Virology at UNL.

“But I don’t know of many examples of viruses jumping from one kingdom to another. If this turns out to be true, this is quite rare and a total surprise.”