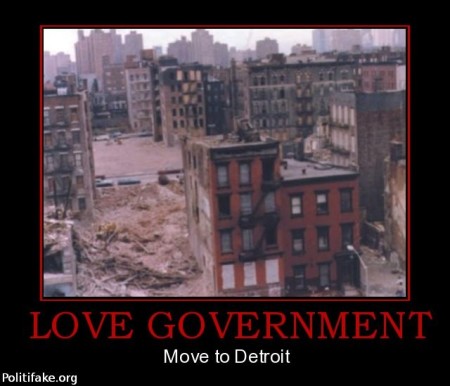 A group of Detroit residents is condemning the city’s newly-approved restructuring plan to exit bankruptcy as a deal that will further benefit the wealthy and corporate class while hurting working people.

A Detroit judge has approved the city’s effort to restructure finances and shed around $7 billion in debt under its bankruptcy filing last year. The plan includes cuts to retiree pensions for city workers and around $660 million in funding from state and private sources. Detroit City Council President Brenda Jones said the city’s next phase of recovery should focus on community improvement.

The deal ends 16 months of bankruptcy proceedings. It will let Detroit spend nearly $2 billion to restore some of the basic public services that have all but disappeared in recent years.

In his approval on Friday, U.S. Bankruptcy Judge Steven Rhodes wrote that “the settlements incorporated into the plan of adjustment are reasonable, fair and equitable.”

A group called Detroiters Resisting Emergency Management, however, says the pension-cutting Plan of Adjustment is anything but fair.

In a statement released Monday, the group writes: “Federal Bankruptcy Judge Steven Rhodes’ approval of the Plan of Adjustment is not in the best interests of Detroiters. The plan, submitted by emergency manager Kevyn Orr, supported by Mayor Duggan and Gov. Snyder, protects banks, gives away public resources, and has no method to revitalize the city.”

Orr, Snyder and Duggan “refuse to acknowledge that the wealth of the surrounding region has been won on the backs of the working people of Detroit. Now their so-called Plan of Adjustment will benefit the same small minority of wealthy people and major financial institutions. The rich will become richer, while the people of Detroit are forced to sacrifice their homes, pensions, healthcare, and city services,” the statement adds.

The main problems with the plan, the group explains in a separate statement, “come down to refusing to recognize the value of working people in general and the needs of black working families in particular.”

“No other creditors sacrificed like Detroit workers and residents. No bank officer or employee, no shareholder or CEO had to sacrifice healthcare or money saved over decades because of the Plan of Adjustment,” said William Davis of the Detroit Active and Retired Employees Association. “Only those who live comfortably who are untouched by the cuts can express joy and relief over a plan that devastates thousands who served the city for decades.”

Davis spoke Monday at a press conference, adding that the cuts to pensions in the plan are “illegal, immoral and […] definitely a crime,” the Detroit News reports. He said that his group and others were planning on filing an appeal to stop the cuts. “We have no choice but to pursue this. I will not agree to being robbed,” Davis said.