What does it mean for winter?

Nothing short of historic

“Waters along the west coast of North America, from Baja California in Mexico to the Gulf of Alaska, are warmer than they’ve been in decades,”  says this article in the Washington Post. “The plume of warm water bleeding up the coast is nothing short of historic.” 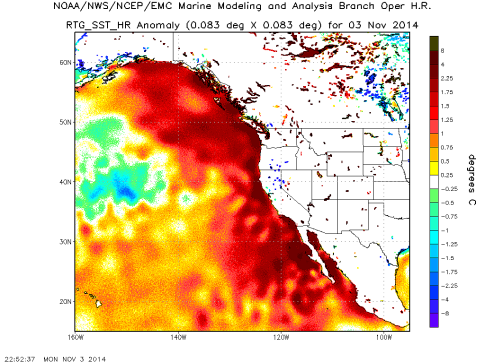 Maybe the warmest EVER

“The North Pacific hasn’t been this warm ever, as far as anyone knows. It’s really strange,” said Bill Peterson, oceanographer with NOAA’s Northwest Fisheries Science Center in Newport, Ore. “It looks like an El Niño, but it really isn’t. We don’t really know what it is.”

(I’m guessing that it’s caused by underwater volcanic activity. I wish we could follow that heat back to its source so that we would know.

“Marine biologists are stunned by an onslaught of outsider warm-water species up and down the West Coast,” the article continues.

“A likely contributor to the warmth is the high pressure (or ridging) pattern over the western U.S. this year. In this pattern, winds from the south push warm water eastward, allowing it to converge along the coast. More commonly, winds from the north hold warm waters in the tropics and produce upwelling which brings cold deep water towards the surface.

What does this mean for winter?

“They may portend more drought for the West Coast this winter, and cold, stormy conditions in the East,” the article concludes.

The warmer waters may also bring some drought relief in Southern California by enhancing the tropical moisture feed from the Pacific into the southern U.S.

1 thought on “Warmest West Coast Waters In Decades – Maybe EVER”