“Surprises like this are poison to the stock market, and this is one of the big surprises,” exclaims the head of listing for Nasdaq’s Copenhagen exchange as OW Bunker A/S – a marine fuel bunker company – went from $1 billion-plus IPO in April to bankruptcy today.

From $1billion IPO to bankruptcy in just over 6 months… 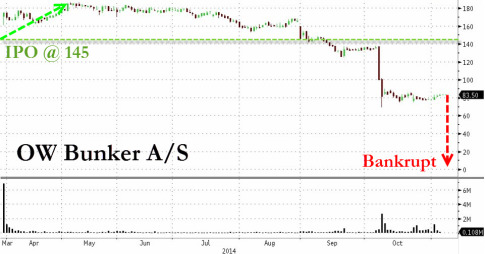 Investors in OW Bunker A/S woke up to a string of horrors yesterday.

OW Bunker, which provides fuel to the marine industry, said on Wednesday shortly before midnight that it had lost $275 million through a combination of fraud committed by senior executives at its Singapore office and poor risk management. Its shares have been suspended since Nov. 5 and the company says its equity has been wiped out.

Just eight months ago, investors drove OW Bunker’s shares up 21 percent in their first day of trading, following an initial public offering that valued it at almost $1 billion.

According to Niels Henrik Jensen, chairman of OW Bunker, the Singapore employee behind the alleged fraud “turned up at the company’s office and told his manager” what he’d done. Jensen declined to provide more details.

“I can’t speculate on how long this has been going on, I didn’t speak to the man myself,” he said. “We’re still not sure whether this was actually illegal — that’s being investigated.”

The company said it lost $125 million through the alleged fraud at its Singapore office. Separate from that, it said it also lost $150 million following a “significant risk management loss” and has as a result fired its head of risk management, Jane Dahl Christensen.

The banks who helped bring OW Bunker to market all say they’re as shocked as anyone else by its revelations over the past two days.

Consequences? None of course, but one must commend Morgan Stanely as lead right underwriter on the March IPO for another underwriter diligence bang up job. 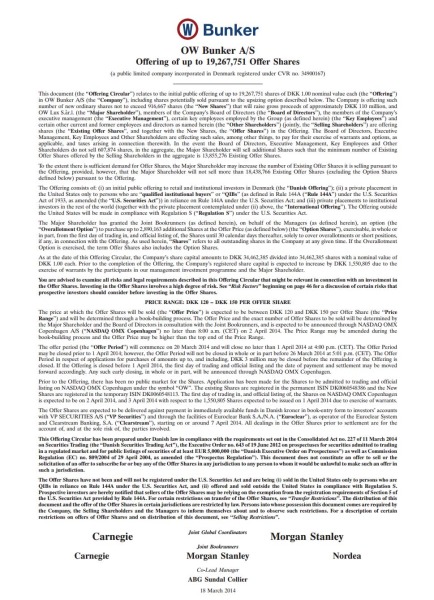 Oddly enough, nowehere in the IPO prospectus risk factors do we read: This company may be bankrupt 8 months after this offering.”