Last week, I reported on the very disturbing fact that a Boynton Beach, Florida police officer had been accused of raping a 20-year old woman at gunpoint while on duty. A week later, we learn that police just 33 miles south, in Fort Lauderdale, raided a 90-year old World War II veteran and two clergymen and charged them with feeding the homeless. Under a new law, these three humanitarians face penalties of up to a $500 fine and/or 60 days in jail for, well, being humanitarians. No, I’m not making this up.

We learn from WPLG Local10:

FORT LAUDERDALE, Fla. – Fort Lauderdale police charged three men — including two pastors and a 90-year-old man — for feeding the homeless in public on Sunday, the first such cases made by the city after the a new ordinance effectively banning public food sharings took effect Friday.

The first to be charged was homeless advocate Arnold Abbott, 90, who has been feeding the homeless in Fort Lauderdale for more than 20 years. Also cited were two Christian ministers — Dwayne Black, pastor of The Sanctuary Church in Fort Lauderdale, and Mark Sims of St. Mary Magdalene Episcopal Church in Coral Springs.

“One of the police officers said, ‘Drop that plate right now,’ as if I were carrying a weapon,” said Abbott, who runs a nonprofit group called Love Thy Neighbor, Inc. “It’s man’s inhumanity to man is all it is.”

“I don’t do things to purposefully aggravate the situation,” said Abbott. “I’m trying to work with the city. Any human has the right to help his fellow man.”

The Broward Palm Beach New Times, adds some additional color on the situation, particularly with regard to the area’s history of mistreating the homeless:

Benjamin Waxman, ACLU lead attorney in the landmark Pottinger v. City of Miamisettlement agreement, calls Fort Lauderdale’s treatment of the homeless “evocative of conditions in Miami before the Pottinger case began” back in 1988.

The Pottinger case established limited protections against criminalizing homelessness in Miami and last year withstood an effort by that city to eliminate its core protections, including ones related to food-sharing and camping. Prior to Pottinger’s original filing, official police abuse of Miami’s homeless, often carried out by its so-called “bum squad,” had become notorious and included such acts of cruelty as the seizure by Miami Police Department officers of homeless persons’ property, which was then burned as they were forced to watch.

The confiscation of the property of six homeless persons in Fort Lauderdale that was overseen by an as-yet-unidentified FLPD officer, alleged to have occurred on the morning of September 24, is just one of countless incidents of abuse reported by homeless people in recent months that justify the comparison with Miami.

An inquiry a week after the incident allegedly occurred to FLPD’s property room manager, Dawn Ramage, confirmed that no property had been turned in despite a requirement that all seized property be stored for at least 30 days. Nor were the homeless folk who spoke about the theft of their property, including one woman whose breathing medication was taken, given a 24-hour notice as the personal property ordinance mandates. The woman, Renee (full name withheld for fear of retribution), who suffers from COPD, wound up in Broward General Hospital for three days because she couldn’t access her medication. Seven bags of recyclables, which the homeless had been collecting to exchange for cash, were also seized in that incident.

Yep, makes sense. Homeless people have basically nothing, so may as well take what little they have. That’ll show em.

Arnold Abbott’s take was the same melodic riff he’s been trumpeting for years: “I went through World War 2. I fought in the Civil Rights movement. This won’t stop us. All this did was move us to court earlier than we had planned.”

Here’s the face of an American “criminal” in 2014. Meanwhile, still not a single bank executive behind bars. 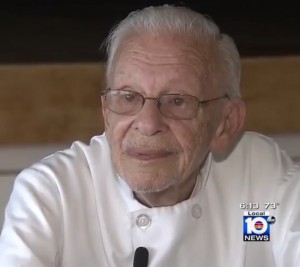 Truly sad it takes a 90-year-man engaging in civil disobedience to demonstrate to the rest of us how apathetic and spineless we have become.

For more articles on the topic of the criminalization of the homeless see:

In 33 U.S. Cities, Feeding the Homeless Has Been Criminalized