Thanks to improving life expectancy and the Federal Reserve’s financial repression lowering yields, US company pension funds have been hit by a double whammy. As Moody’s warns, companies will have to find $110 billion in the next seven years to fund pension liabilities shortfalls. Moody’s adds, “given these increasing liabilities and cash drains, we expect to see an acceleration in lump sum offers,” as firms try to derisk.

Improving life expectancy is expected to add billions to the amount companies must pay into their defined benefit plans.

US companies will have to find $110 billion in the next seven years to fund pension liabilities as life expectancy increases, according to ratings agency Moody’s.

Using data from new mortality tables published by the Society of Actuaries last week, Moody’s calculated significant increases in the amount of cash US firms would have to contribute to their defined benefit pensions in order to match growing liabilities.

Moody’s applied the calculations to the funding obligations for 10 of the biggest listed companies in the US. IBM’s funding obligations – which include servicing the pension fund as well as regular contributions adjusted for 2% inflation – were estimated at $99.7 billion in 2013, but Moody’s calculations showed this could increase to as much as $113.6 billion at the top end of assumptions. 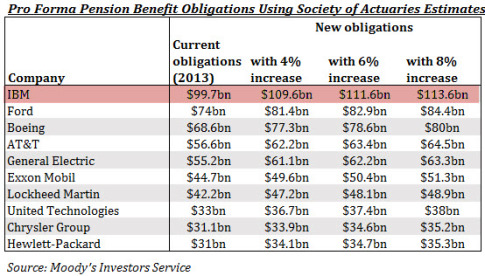 “Given these increasing liabilities and cash drains, we expect to see an acceleration in lump sum offers and annuitizations similar to Motorola’s recent pension plan restructuring, which, through a combination of annuitizations and lump sum offers, it expects will reduce its [obligations] by $4.2 billion,” wrote Wesley Smyth, senior accounting analyst at Moody’s.

In September, ahead of the publication of the tables, Moody’s predicted the new data would trigger a rise in de-risking activity. This year has already seen several giant transactions, with the BT Pension Scheme, Motorola, Bristol-Myers, and two Dutch miners’ pension funds all engaging in de-risking deals.

Of course, if the pension funds just followed Japan’s lead and went all-in on stocks, there would be no problem, right?