Ebola is solved. Oil price drops are “unequivocally good news”. The US election is positive. Draghi promised to do whatever it takes again. And Ukraine is in ceasefire.So why is it that Donetsk’s Deputy Prime Minister Andriy Purgin claims Ukrainian security officials have started full-scale fighting, clashing 26 times today according to Ukraine military.y. With tanks advancing, Purgin exclaims, “now there is a full-scale war… attacking us, we are defending.”

As RIA reports (via Google Translate),

“Now there is a full-scale war … attacking us, we are defending,” –he said, noting that the ceasefire is broken Kiev siloviki.

Purgin said that the ceasefire was not observed at 75% of the contact line, but “now at war where no war before that.”

Earlier Thursday, the militia DNR reported that in a suburb of Donetsk Yasinovataya tank column entered Ukrainian security officials, the surrounding areas of Donetsk were fired.

Get damaged kindergarten building in the street and the building Aristova Chamber of Commerce at the Kiev Avenue, and a number of houses on the avenue of the Kremlin. Data on victimsare specified, reported three wounded.

Militias reported that clashed, was destroyed at least five armored vehicles (tanks andAPCs). At this time the attack was repelled.

The Ruble has been crushed to new record lows over 46 to the USDollar and Russian stocks are tumbling. 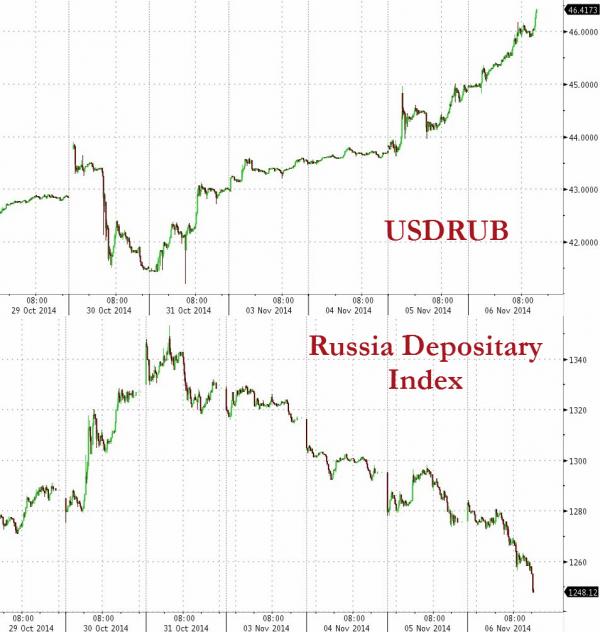