‘Democrats took it on the chin Tuesday night, losing the Senate, getting crushed in winnable governors’ races, solidifying their minority status in the House for years to come, and stemming the party’s ability to continue putting its stamp on the judiciary.’

The Republican Party experienced many more victories than losses on Tuesday’s Election Day, winning more than enough seats to take control of the U.S. Senate and increase its majority in the U.S. House of Representatives. The GOP also won at the state-level, as the party’s gubernatorial candidates beat out rivals in a number of states, including some that typically vote Democrat.

“This is ugly,” one top Democrat involved in the party’s election strategy told the Guardian in the early hours of Wednesday morning. “It is so much worse than we expected.”

As Sam Stein and Ryan Grim report for the Huffington Post, “Call it a thumping. Call it a shellacking. However you want to describe the 2014 midterm elections, the point remains the same. Democrats took it on the chin Tuesday night, losing the Senate, getting crushed in winnable governors’ races, solidifying their minority status in the House for years to come, and stemming the party’s ability to continue putting its stamp on the judiciary.”

And CNN presented current results from gubenatorial races with this map: 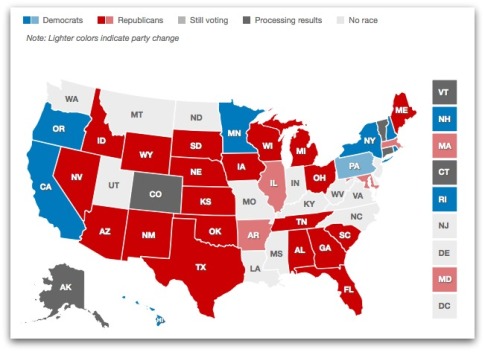 According to the Associated Press:

Riding a powerful wave of voter discontent, resurgent Republicans captured control of the Senate and tightened their grip on the House Tuesday night in elections certain to complicate President Barack Obama’s final two years in office.

Republican Mitch McConnell led the way to a new Senate majority, dispatching Democratic challenger Alison Lundergan Grimes in Kentucky after a $78 million campaign of unrelieved negativity. Voters are “hungry for new leadership. They want a reason to be hopeful,” said the man now in line to become majority leader and set the Senate agenda.

Republicans also picked up seats in Iowa, West Virginia, South Dakota and Montana, all states where Democrats retired. They had needed a net gain of six seats to end a Democratic majority in place since 2006.

In the House, with dozens of races uncalled, Republicans had picked up 11 seats that had been in Democratic hands, and given up only one.

A net pickup of 13 would give them more seats in the House than at any time since 1946.

On the gubernatorial races, McClatchyreports:

Democrats’ hopes of ousting a number of beleaguered Republican governors on Tuesday were crushed by the GOP wave that also flipped control of the U.S. Senate.

Democratic governors from Connecticut to Colorado were at risk of losing their jobs, too, adding to the party’s Election Day woes.

Democrats had aimed to win many of the 14 toss-up gubernatorial races, out of a total of 36 nationwide. By late Tuesday, they had prevailed in just two.

With their perceived mandate, Republican governors and GOP-dominated state legislatures will be emboldened to advance conservative legislation of the sort promoted by the corporate-funded American Legislative Exchange Council (ALEC), said Lisa Graves, executive director of the nonprofit watchdog group the Center for Media and Democracy, in an email interview with Common Dreams.

Before the results started rolling in on Tuesday, Graves warned: “If there are a lot of Republican gubernatorial pickups, we would expect them to double-down on the ALEC agenda: more austerity, more union-busting, more efforts to undermine renewable energy and measures to address the climate changes underway, and increased outsourcing of schools and public services to for-profit firms that bankroll them.”

In his response to Tuesday’s election results, Sen. Bernie Sanders (I-Vt.) said that low voter-turnout has become a major factor in U.S. elections, as fewer and fewer people negatively impacted by results like this don’t even show up to the polls.

“Why aren’t people coming out voting?” asked Sanders in a radio interview with journalist Bill Press on Wednesday. “Why aren’t they standing up and fighting back for decent-paying jobs, for higher wages for better trade policy?”

As for the Democratic Party leadership and more progressive-minded lawmakers like himself, Sanders added, “There is massive unhappiness and discontent with the political process and we’ve got to figure out how we reconnect with ordinary people.”