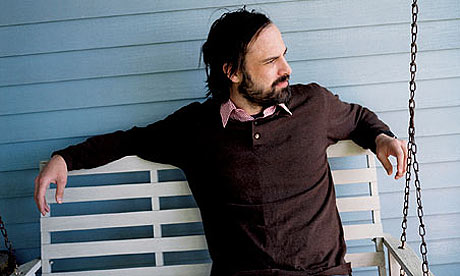 “A couple of years ago I demanded he stop his work. Close down his company or I would sever our relationship. He refused. He has just gotten worse. More evil. More powerful. We’ve been ‘estranged’ for over three years … Previously I thought that through songs and poems and drawings I could find and build a refuge away from his world. But there is the matter of Justice. And I’ll tell you it’s not just a metaphor. The desire for it actually burns. It hurts. There needs to be something more. I’ll see what that might be.”

Berman has called off the Silver Jews’ forthcoming tour and declared the band’s saga to be coming to a close. “I guess I am moving over to another category,” he wrote. “Screenwriting or Muckraking … I’m 42 and I know what to do. I’m a writer, see?”

Berman founded the Silver Jews in 1989, together with Stephen Malkmus and Bob Nastanovich, who later formed Pavement. The band’s ragged, wry country-rock won a devoted following, particularly on the strength of Berman’s lyrics. In the years following the publication of his first book of poetry, Actual Air, in 1999, Berman developed a substance abuse problem. He fell off the musical map and attempted suicide by taking an overdose in 2003. But with the help of his wife, Cassie, Berman bounced back, stayed sober, and relaunched the Silver Jews – now with Cassie playing bass. In 2005 – five albums into their career – the band announced their first-ever tour.

It’s Cassie, Berman said, who “is taking it the hardest. She’s a fan and a player but she sees how happy I am with the decision. I always said we would stop before we got bad. If I continue to record I might accidentally write the answer song to [REM’s] Shiny Happy People”.

To borrow the title of a recent Silver Jews song, it’s still difficult to tell if this decision is a Strange Victory or a Strange Defeat. As admirable as it is to quit while you are ahead – and as much as we look forward to new non-musical works from the main Silver Jew – it does make us sad. “This winter I decided that the SJs were too small of a force to ever come close to undoing a millionth of all the harm [my father] has caused,” David Berman wrote. But he’s wrong.

2 thoughts on “Silver Jews Frontman, Son Of ‘Dr. Evil’ Reveals Cause Of Split: ‘My father is a despicable man … a human molestor … an exploiter … a scoundrel’ ‘… a motherfucking son of a bitch’”