I wrote an article recently over at Voices of Liberty that lays out the very dire picture for those of us who have yet to retire.  The gist of the article is that the Fed has effectively robbed the retired class of any hope for having enough of a nest egg to live off through the end of their lives if they want to retire at 65.

Some may argue well this past 10 years has just been an anomaly of low interest rates but they will come back i.e. normalize to higher levels here in the next couple years.  Well let me show you why that is simply wrong.

Here is why interest rates will be perpetually low for the rest of our lives, why the inflation calculation has been changed to a dynamic formula (meaning they now change the inputs each quarter) and why those of us yet to retire are screwed. 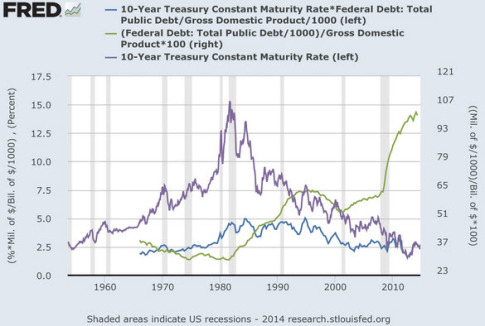 Do note that total debt as a percentage of GDP (green line) recently exceeded 100%.  Also note that as the green line increases the spread between the purple and blue lines gets smaller.  This is really just an algebraic principle.  Historically the blue line is essentially a fixed rate (within a range) and so as the green line moves up the purple line (AIR) must move down so the DSGDP stays within the fixed range.  As total debt became a higher percentage of GDP the average interest rate on debt must move down toward that 2.5% line that we’ve held for 15 years.  As the total debt to GDP moves above 100% we should start to see the average interest rate on total debt (the purple line) move below 2.5% in order to keep the DSGDP around the 2.5% 15 year average.  As a side, I did regress these relationships and found both statistical significance and good explanatory properties.

Now even the CBO is forecasting debt to GDP to continue rising for as far as the eye can see and so there must be a negative slope on interest rates. If average interest rates on debt were to move back to let’s say the 20 yr average of 7.5% our interest payments would take up 7.5% to 10% of our GDP.  And that is something we simply cannot afford.  The most our average interest on total debt can move in the near term is to around 4% which would take us to the high end of the historic DSGDP range.  Fortunately I suppose that would also crush what little demand is left in the economy and so there is much incentive to do so.  In 5 or 10 years time total debt will be sufficiently more than GDP that even 4% will be unsustainably high.

You will see from the chart above we’ve had a fairly steady decline in interest rates since the late 1970′s about the same time that total debt began rising as a percentage of GDP.  The inverse relationship between these two metrics is not coincidence, but of necessity.  So you start to understand that interest rates are locked into a very low range forever or at least until total debt gets paid down, which none of us expect to ever happen.   So with total debt greater than GDP and rising it’s SOL for future retirees and all other savers.  Next stop will be negative interest rates which of course will need to be monetized.  In chess they have a term called Zugzwang; a situation in which no matter what move you make you will be worse off than you are currently.  I believe we may be in a Zugzwang now.

2 thoughts on “Interest Rates Cannot Rise And Here’s Why …”