Disillusionment with Europe’s single currency continues to grow with the cracks beginning to show in it’s heartland, Germany, where the third largest political party is now selling gold coins and bars to raise funds.

In a poll in September Alternative for Germany (AfD) were found to be Germany’s third most popular party. The rise of the Alternative for Germany (AfD) party saw it receive 10.6% of the vote in Thuringia and 12.2% in Brandenburg on 14 September. Two weeks earlier it secured its first regional government seats in Saxony. AfD are not anti-EU per se and have distanced themselves from other eurosceptic parties. They see a future for Germany in the EU and embrace common markets but wish to see the European Monetary Union (EMU) and the euro itself wound up and a return to the Deutschmark. In the past two weeks, in a bid to gain as much state funding as possible they have entered the gold bullion market with quite a degree of success. In Germany, the federal government will match, up to a value of €5 million, any funds raised privately by a political party. In a bid to get the full allocation of state funding, AfD have started to sell gold bullion online. In the two weeks since the scheme was announced they have sold gold coins and bars worth a sizable €1.6 million.There has been strong, broad based demand for precious metals in Germany in recent weeks and months due to concerns about the Eurozone, the Euro, the conflict with Russia and global uncertainties.AfD have managed to sell a large volume of bullion bars and coins despite being unable to undercut the well established bullion dealers with whom they have been competing. This indicates that their customers are motivated to buy gold from them specifically because they support the party and it’s policies.

“I have always warned that we can not compete with the prices of the competition,” federal executive of the party Konrad Adam told Spiegel newspaper.  “People should not feel deceived by our offer.”

The smash on silver and gold on Thursday and Friday of last week played into the AFD’s hands as it saw German people, both investors and savers, entering the market in droves to take advantage of the low prices. Gold brokers across Germany described the manner in which demand for precious metals exploded last week as “a run.”  Many have seen a sharp increase in demand and found their inventories insufficient to meet demand according to Goldreporter.

Germans have become more knowledgeable vis-a-vis precious metals in the last few years and indeed have a cultural affinity for gold due to the hyperinflation and to Hitler’s banning of gold ownership.The benefits of owning a tangible, divisible asset that cannot be printed at will by a government is strong in the folk memory. The lack of a response of the Merkel government following the scandal which arose when the Federal Reserve refused Germany’s request to have it’s sovereign gold repatriated has also motivated many Germans to take matters of wealth protection into their own hands. 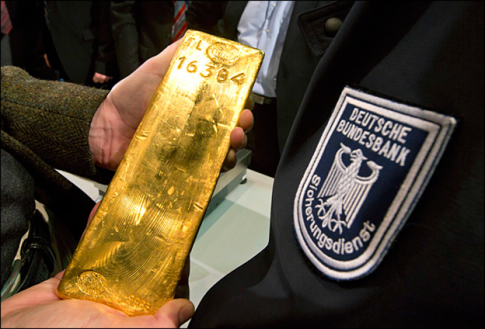 They, like many people in the world today, are electing to become their own central bank.The prudence and patience for which Germans are admired are worthy of emulation in these times. It is wise to do ones own research into owning precious metals and if one does take a position in gold  – be sure to own coins and bars in segregated, allocated vaults in safe jurisdictions such as Switzerland. Trust in one’s decision and your judgement and view the volatility of the market with equanimity.The fragile global financial and monetary system is teetering on the edge of collapse and serious inflation and stagflation is likely on the cards.In the event of a crisis, gold will be there to help protect you which may not necessarily be the case for paper money and digits on a computer screen. Gold was gold at the dawn of time and will continue to be.
Get Breaking News and Updates on the Gold Market Here