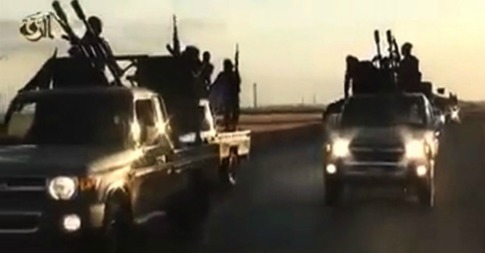 A report by the United Nations, obtained by the Guardian newspaper, reveals that foreign jihadist fighters are flocking to battlefields in Iraq and Syria on an “unprecedented scale” since the United States and other allies began a wave of military operations in those countries over the last several months.

According to the Guardian’s Spencer Ackermann, the UN report

finds that 15,000 people have travelled to Syria and Iraq to fight alongside the Islamic State (Isis) and similar extremist groups. They come from more than 80 countries, the report states, “including a tail of countries that have not previously faced challenges relating to al-Qaida”.

The UN said it was uncertain whether al-Qaida would benefit from the surge. Ayman al-Zawahiri, the leader of al-Qaida who booted Isis out of his organisation, “appears to be maneuvering for relevance”, the report says.

The UN’s numbers bolster recent estimates from US intelligence about the scope of the foreign fighter problem, which the UN report finds to have spread despite the Obama administration’s aggressive counter-terrorism strikes and global surveillance dragnets.

“Numbers since 2010 are now many times the size of the cumulative numbers of foreign terrorist fighters between 1990 and 2010 – and are growing,” says the report, produced by a security council committee that monitors al-Qaida.

Critics of President Obama’s newest war in the Middle East have long-argued that the nature of the campaigns used by western nations to supplant groups like ISIS and al Qaeda—namely the invasion and occupation of foreign nations, cross-border drone attacks, airstrikes that frequently kill civilians and the backing of repressive foreign regimes—have, in fact, emboldened these entities and rallied others to their cause.

The Obama administration has repeatedly said the new wars being fought by U.S. soldiers in Iraq and Syria will be a “long-term” engagement.

1 thought on “UN Report: New US War in Iraq and Syria Attracting Jihadists in Droves”