Still confused what the BOJ’s shocking move was about, aside from pushing the US stock market to a new record high of course? This should explains it all: as the chart below show, as a result of the BOJ’s stated intention to buy 8 trillion to 12 trillion yen ($108 billion) of Japanese government bonds per month it means the BOJ will now soak up all of the 10 trillion yen in new bonds that the Ministry of Finance sells in the market each month.

In other words. The Bank of Japan’s expansion of record stimulus today may see it buy every new bond the government issues. 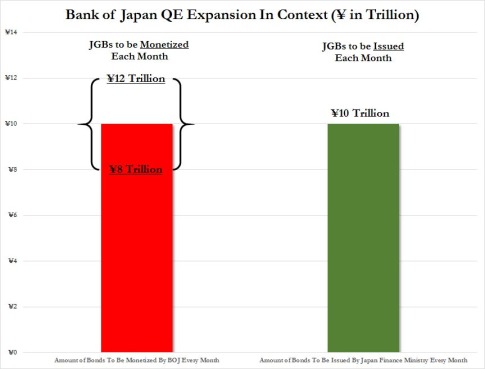 The central bank is already the largest single holder of Japan’s bonds, and the scale of its buying could fuel concerns it is underwriting deficits of a nation with the heaviest debt burden. The BOJ could end up owning half of the JGB market by as early as in 2018, according to Takuji Okubo, chief economist at Japan Macro Advisors in Tokyo.

“Kuroda knows when to go ALL in,” Okubo wrote in a note. “The BOJ is basically declaring that Japan will need to fix its long-term problems by 2018, or risk becoming a failed nation.”

Kuroda said earlier this month that while the BOJ holds only about 20 percent of Japan’s outstanding government bonds, the Bank of England holds approximately 40 percent of U.K. government debt.

We wish Japan the best of luck in avoiding becoming a “failed nation.”

Then again there is something to be said about a nation which is now desperately, and obviously to everyone, trying to unleash hyperinflation… and, for now at least, is failing.