– Think GMO Is Scary? Nano Tech is Here, In Your Store (Activist Post) 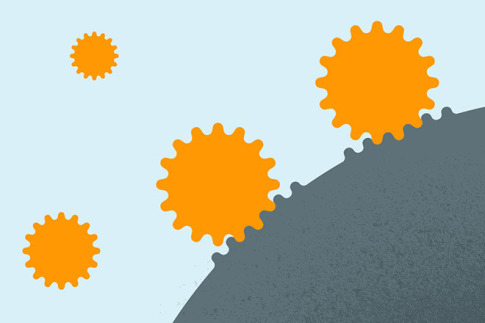 Nanoparticles circulate in the blood and can be built to attach to particular types of cells, such as circulating cancer cells.

– Google Developing a Pill That Would Detect Cancer and Other Diseases

LAGUNA BEACH, California — Google is attempting to develop a pill that would send microscopic particles into the bloodstream in an effort to identify cancers, imminent heart attacks, and other diseases.

Andrew Conrad, the head of life sciences inside the company’s Google X research lab, revealed the project on Tuesday morning at a conference here in Southern California. According to Conrad, the company is fashioning nanoparticles—particles about one billionth of a meter in width—that combine a magnetic material with antibodies or proteins that can attach to and detect other molecules inside the body. The idea is that patients will swallow a pill that contains these particles, and after they enter the bloodstream—attempting to identify molecules that would indicate certain health problems—a wearable device could use their magnetic cores to gather them back together and read what they’ve found.

“Because the core of these particles is magnetic, you can call them somewhere,” Conrad said, indicating that you could use a wearable device to gather them in the superficial veins on the inside of your wrist. “These little particles go out and mingle with the people, we call them back to one place, and we ask them: ‘Hey, what did you see? Did you find cancer? Did you see something that looks like a fragile plaque for a heart attack? Did you see too much sodium?”

Known as the “Nanoparticle Platform,” the project is part of a wider effort inside Google to develop new technologies capable of improving healthcare. “Google X’s job is to take on big problems, to try to find clever solutions to big problems, and one of the problems we decided to tackle was healthcare,” Conrad said. “The way in which we envision doing this is inverting the paradigm in medicine—which is currently reactive and episodic—to a new paradigm that is proactive and cumulative.” As Conrad put it, this involves building “gizmos” that can monitor your health in new ways.

In January, for instance, the company unveiled a contact lens that would let diabetics monitor blood glucose levels through the tears in their eyes. As with this contact lens, Google does not intend to sell its nanoparticle pills and accompanying wearables. Instead, it will work with third party medical companies to bring the technology to market.

Conrad said “there is a lot of evidence” that these nanoparticles are safe and that similar nanonparitcles are already used in some medicines available today and in contrast agents used in magnetic resonance imaging, or MRI, tests. These particles would be expelled from the body, he explained, through urine.

The wearable device that reads these particles, Conrad said, could be configured to send information, across the internet, back to a doctor. The idea, he explained, is that you or your doctor could monitor your health in a more consistent way. “So, you get a more continuous monitoring, rather than episodic monitoring,” he said.

According to Conrad, Google is actively looking for partners on the project. But he did not say when the technology might arrive to market, and it’s unclear how far along the company is in developing the technology.