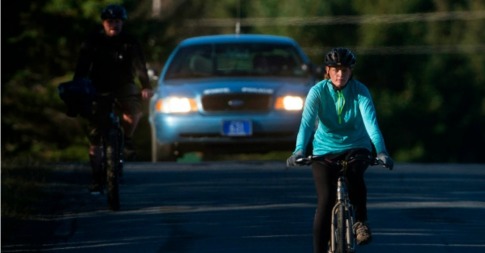 Kaci Hickox (pictured) and boyfriend Ted Wilbur go for a bike ride in Fort Kent Thursday. The pair were followed by a state police car. Hickox returned last week to the U.S. from West Africa, where she treated Ebola patients. She is fighting a 21-day home quarantine. (Photo: Bangor Daily News)

Defying a state-ordered quarantine on Thursday morning, nurse Kaci Hickox left her home in the rural town of Fort Kent, Maine to go for a bike ride with her partner, Ted Wilbur. The two were not stopped, but were followed on their ride by a state trooper patrol car.

“It’s a beautiful day for a bike ride,” Hickox said, according to the local Bangor Daily News, as she rode along the road.

Hickox and her attorney, New York civil rights lawyer Norman Siegel, vowed to fight any attempt made by the state to extend the at-home isolation period beyond Thursday. Twenty-one days is the maximum incubation period for the Ebola virus. State officials have indicated that period for Hickox would end Nov. 10.

Fort Kent Police Chief Tom Pelletier told the Bangor Daily News he wanted to speak with Hickox Thursday morning about specific safety concerns based on information he received Wednesday. He would not comment on the nature of those safety concerns.

About 8:30 a.m. he tried to call her on the phone. He said he left her a voice mail message.

“I want to make sure she has not received any threats. And if she has, that she contacts us,” Pelletier said.

Meanwhile, the American Civil Liberties Union of Maine and the American Nurses Association issued statements on Thursday morning calling on the state to avoid imposing unwarranted conditions on Hickox.

“The American Nurses Association opposes the mandatory quarantine of health care professionals who return to the United States from West African nations where Ebola is widespread,” ANA President Pamela Cipriano said in that organization’s press release. “ANA supports registered nurse Kaci Hickox … in her challenge of a 21-day quarantine imposed by state officials in Maine. … After testing negative twice for Ebola, nurse Hickox, who continues to be symptom free, poses no public threat.”

The national debate about how local government agencies should responsibly handle returning healthcare workers who have treated Ebola patients in West Africa is coming to a head in a rural section of  Maine where nurse Kaci Hickox has said she and her lawyers are ready to challenge a forced quarantine order on behalf of “other aid workers coming back every day.”

If the state files legal action against her, she said, the civil rights attorney who has taken up her case is ready to fight those restrictions in court. Though she had said Wednesday she would attempt to leave her house on Thursday to test the state’s imposed restriction, Hickox said early Thursday morning that she’s not yet decided how she’ll proceed.

“The ball is in the state’s court,” she said of possible litigation. “My lawyers and I will discuss that and then decide.”

Hickox, who first made news when the state of New Jersey put her in forced isolation at a Newark hospital when she returned from Sierra Leone last week, emerged from her home in Fort Kent, Maine early Thursday morning and told reporters that her treatment in her home state has been little better and characterized the rhetoric of state officials, including Gov. Paul LePage, as misguided.

“We have been in negotiations all day with the state of Maine and tried to resolve this amicably, but they are not allowing me to leave my house and interact with the public even though I am completely healthy and symptom free,” Hickox told reporters from her front steps. “I am frustrated by this fact, and I have been told that it is the Attorney General’s intention to file legal action against me. And if this does occur, I will challenge the legal actions.”

The international aid group Doctor’s Without Border, with whom Hickox worked while in Sierra Leone, released a statement on Thursday condemning the way the nurse has been treated and reiterating its stance that enforcing quarantines in situations such as this are “not based upon established medical science” and are not appropriate. Quarantines like this will only undermine efforts to curb the epidemic at its source in West Africa, the group said.

“Kaci Hickox has carried out important, lifesaving work for MSF in a number of countries in recent years,” the group stated, “and we are proud to have her as a member of our organization. MSF respects Kaci’s right as a private citizen to challenge excessive restrictions being placed upon her.”

According to the Bangor Daily News in Maine:

Maine health officials have said they expect Hickox to agree to be quarantined at her home until 21 days have passed since her last potential exposure to the virus. Twenty-one days is the maximum incubation period for the Ebola virus.

“We are very concerned about her safety and health and that of the community,” LePage said in a statement. “We are exploring all of our options for protecting the health and well-being of the health care worker, anyone who comes in contact with her, the Fort Kent community and all of Maine. While we certainly respect the rights of one individual, we must be vigilant in protecting 1.3 million Mainers, as well as anyone who visits our great state.”

During a Wednesday evening news conference, Department of Health and Human Services Commissioner Mary Mayhew said she did not see the quarantine as an infringement of Hickox’s rights but a “common-sense approach” and a “reasonable request” to protect the public health.

She also said that the Maine attorney general’s office was working on the necessary paperwork to seek that court order, and that it could be submitted to a judge as soon as Wednesday night.

Mayhew said during a news conference that should Hickox leave her home before Nov. 10 and the state still does not have a court order to enforce the quarantine, the state police will monitor her movements and keep track of those with whom she makes contact.

At a White House event, President Barack Obama scolded politicians who have sought quarantines or strict travel bans for caving into fears, although he did not mention anyone by name.”When I hear people talking about American leadership, and then are promoting policies that would avoid leadership and have us running in the opposite direction and hiding under the covers, it makes me a little frustrated,” Obama said.