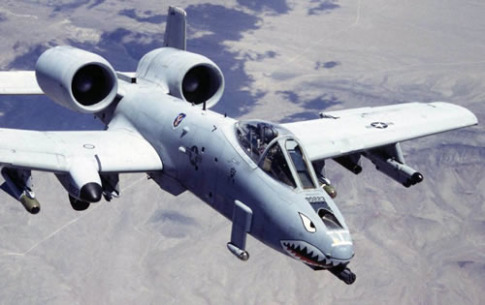 There’s a version of this story at Al Jazeera.

The U.S. Air Force says it is not halting its use of Depleted Uranium weapons, has recently sent them to the Middle East, and is prepared to use them.

A type of airplane, the A-10, deployed this month to the Middle East by the U.S. Air National Guard’s 122nd Fighter Wing, is responsible for more Depleted Uranium (DU) contamination than any other platform, according to the International Coalition to Ban Uranium Weapons (ICBUW). “Weight for weight and by number of rounds more 30mm PGU-14B ammo has been used than any other round,” said ICBUW coordinator Doug Weir, referring to ammunition used by A-10s, as compared to DU ammunition used by tanks.

Public affairs superintendent Master Sgt. Darin L. Hubble of the 122nd Fighter Wing told me that the A-10s now in the Middle East along with “300 of our finest airmen” have been sent there on a deployment planned for the past two years and have not been assigned to take part in the current fighting in Iraq or Syria, but “that could change at any moment.”

The crews will load PGU-14 depleted uranium rounds into their 30mm Gatling cannons and use them as needed, said Hubble. “If the need is to explode something — for example a tank — they will be used.”

Pentagon spokesman Mark Wright told me, “There is no prohibition against the use of Depleted Uranium rounds, and the [U.S. military] does make use of them. The use of DU in armor-piercing munitions allows enemy tanks to be more easily destroyed.”

On Thursday, several nations, including Iraq, spoke to the United Nations First Committee, against the use of Depleted Uranium and in support of studying and mitigating the damage in already contaminated areas. A non-binding resolution is expected to be voted on by the Committee this week, urging nations that have used DU to provide information on locations targeted. A number of organizations are delivering a petition to U.S. officials this week urging them not to oppose the resolution.

In 2012 a resolution on DU was supported by 155 nations and opposed by just the UK, U.S., France, and Israel. Several nations have banned DU, and in June Iraq proposed a global treaty banning it — a step also supported by the European and Latin American Parliaments.

Wright said that the U.S. military is “addressing concerns on the use of DU by investigating other types of materials for possible use in munitions, but with some mixed results. Tungsten has some limitations in its functionality in armor-piercing munitions, as well as some health concerns based on the results of animal research on some tungsten-containing alloys. Research is continuing in this area to find an alternative to DU that is more readily accepted by the public, and also performs satisfactorily in munitions.”

“I fear DU is this generation’s Agent Orange,” U.S. Congressman Jim McDermott told me. “There has been a sizable increase in childhood leukemia and birth defects in Iraq since the Gulf War and our subsequent invasion in 2003. DU munitions were used in both those conflicts. There are also grave suggestions that DU weapons have caused serious health issues for our Iraq War veterans. I seriously question the use of these weapons until the U.S. military conducts a full investigation into the effect of DU weapon residue on human beings.”

Doug Weir of ICBUW said renewed use of DU in Iraq would be “a propaganda coup for ISIS.” His and other organizations opposed to DU are guardedly watching a possible U.S. shift away from DU, which the U.S. military said it did not use in Libya in 2011. Master Sgt. Hubble of the 122nd Fighter Wing believes that was simply a tactical decision. But public pressure had been brought to bear by activists and allied nations’ parliaments, and by a UK commitment not to use DU.

DU is classed as a Group 1 Carcinogen by the World Health Organization, and evidence of health damage produced by its use is extensive. The damage is compounded, Jeena Shah at the Center for Constitutional Rights (CCR) told me, when the nation that uses DU refuses to identify locations targeted. Contamination enters soil and water. Contaminated scrap metal is used in factories or made into cooking pots or played with by children.

CCR and Iraq Veterans Against the War have filed a Freedom of Information Act Request in an attempt to learn the locations targeted in Iraq during and after the 1991 and 2003 assaults. The UK and the Netherlands have revealed targeted locations, Shah pointed out, as did NATO following DU use in the Balkans. And the United States has revealed locations it targeted with cluster munitions. So why not now?

“For years,” Shah said, “the U.S. has denied a relationship between DU and health problems in civilians and veterans. Studies of UK veterans are highly suggestive of a connection. The U.S. doesn’t want studies done.” In addition, the United States has used DU in civilian areas and identifying those locations could suggest violations of Geneva Conventions.

Iraqi doctors will be testifying on the damage done by DU before the Tom Lantos Human Rights Commissionin Washington, D.C., in December.

Meanwhile, the Obama Administration said on Thursday that it will be spending $1.6 million to try to identify atrocities committed in Iraq . . . by ISIS.