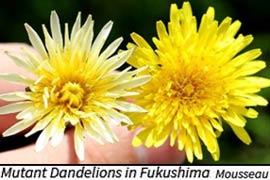 Nuclear expert Arnie Gundersen of Fairewinds Energy Education on Radio Ecoshock, Oct 27, 2014 (11:30 in): We work with a woman… an organic gardener. Every year, she’s taken the seeds from her garden, planted, then harvested seeds from those plants to be the next year’s crop. So she’s got 4 years now of seeds that have been growing about 30 miles (~50 km) from Fukushima. She’s beginning to experience gargantuanism in her food now, which is an indication of radiation damage. It’s one of the many DNA changes that occur after a couple of generations. So we know that gardeners and plants that are outside the exclusion zone are seeing the effects of chronic levels of radiation that the Japanese would choose to ignore.

Natalia Manzurova, radiation biologist: For the 10 years before Chernobyl happened, I worked as a scientific researcher [at the] Mayak nuclear facility. We studied the impact of radiation on the environment… plants, fish, birds… When Chernobyl happened, all the members of this institute were sent permanently to Chernobyl… The trees that had leaves — the leaves were gigantic. The seeds and the leaves were very big. I’m following the accident in Fukushima very attentively and when I heard, ‘Everything is okay, the environment will be safe, there is no immediate risk’… the same we were told when Chernobyl happened — just in the same words… Is there anyone who believes the mass media confirmations that everything is okay in Fukushima? You should understand perfectly well that the nuclear industry and nuclear bureaucracy — the first thing they think about is not you, but about their pocket, about the face they present. But the public will have to pay. The public can lose everything — health, the place where they live, their future. You should build up your own point of view of how to react to this nuclear industry… You should educate yourself… It is up to you to know. I’m quite sure… you will say, ‘We want to live in a clean environment and grow healthy children — and we want to decide our own destiny.’