Back on January 26, a 58-year-old former senior executive at German investment bank behemoth Deutsche Bank, William Broeksmit, was found dead after hanging himself at his London home, and with that, set off an unprecedented series of banker suicides throughout the year which included former Fed officials and numerous JPMorgan traders.

Following a brief late summer spell in which there was little if any news of bankers taking their lives, as reported previously, the banker suicides returned with a bang when none other than the hedge fund partner of infamous former IMF head Dominique Strauss-Khan, Thierry Leyne, a French-Israeli entrepreneur, was found dead after jumping off the 23rd floor of one of the Yoo towers, a prestigious residential complex in Tel Aviv.

Just a few brief hours later the WSJ reported that yet another Deutsche Bank veteran has committed suicide, and not just anyone but the bank’s associate general counsel, 41 year old Calogero “Charlie” Gambino, who was found on the morning of Oct. 20, having also hung himself by the neck from a stairway banister, which according to the New York Police Department was the cause of death. We assume that any relationship to the famous Italian family carrying that last name is purely accidental.

Here is his bio from a recent conference which he attended:

Charlie J. Gambino is a Managing Director and Associate General Counsel in the Regulatory, Litigation and Internal Investigation group for Deutsche Bank in the Americas. Mr. Gambino served as a staff attorney in the United Securities and Exchange Commission’s Division of Enforcement from 1997 to 1999. He also was associated with the law firm of Skadden, Arps, Slate Meagher & Flom from 1999 to 2003. He is a frequent speaker at securities law conferences. Mr. Gambino is a member of the American Bar Association and the Association of the Bar of the City of New York.

As a reminder, the other Deutsche Bank-er who was found dead earlier in the year, William Broeksmit, was involved in the bank’s risk function and advised the firm’s senior leadership; he was “anxious about various authorities investigating areas of the bank where he worked,” according to written evidence from his psychologist, given Tuesday at an inquest at London’s Royal Courts of Justice. And now that an almost identical suicide by hanging has taken place at Europe’s most systemically important bank, and by a person who worked in a nearly identical function – to shield the bank from regulators and prosecutors and cover up its allegedly illegal activities with settlements and fines – is surely bound to raise many questions.

The WSJ reports that Mr. Gambino had been “closely involved in negotiating legal issues for Deutsche Bank, including the prolonged probe into manipulation of the London interbank offered rate, or Libor, and ongoing investigations into manipulation of currencies markets, according to people familiar with his role at the bank.”

He previously was an associate at a private law firm and a regulatory enforcement lawyer from 1997 to 1999, according to his online LinkedIn profile and biographies for conferences where he spoke. But most notably, as his LinkedIn profile below shows, like many other Wall Street revolving door regulators, he started his career at the SEC itself where he worked from 1997 to 1999. 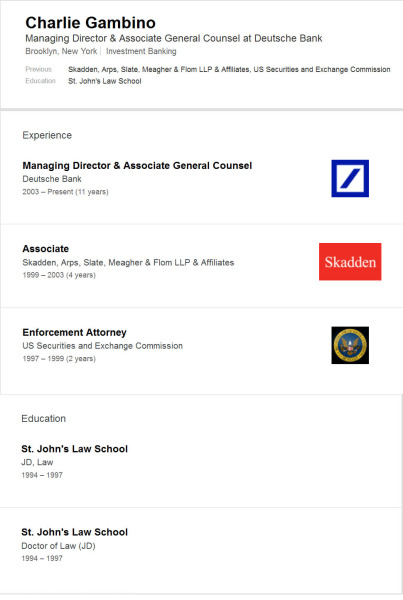 “Charlie was a beloved and respected colleague who we will miss. Our thoughts and sympathy are with his friends and family,” Deutsche Bank said in a statement.

Going back to the previous suicide by a DB executive, the bank said at the time of the inquest that Mr. Broeksmit “was not under suspicion of wrongdoing in any matter.” At the time of Mr. Broeksmit’s death, Deutsche Bank executives sent a memo to bank staff saying Mr. Broeksmit “was considered by many of his peers to be among the finest minds in the fields of risk and capital management.” Mr. Broeksmit had left a senior role at Deutsche Bank’s investment bank in February 2013, but he remained an adviser until the end of 2013. His most recent title was the investment bank’s head of capital and risk-optimization, which included evaluating risks related to complicated transactions.

A thread connecting Broeksmit to wrongdoing, however, was uncovered earlier this summer when Wall Street on Parade referenced his name in relation to the notorious at the time strategy provided by Deutsche Bank and others to allow hedge funds to avoid paying short-term capital gains taxes known as MAPS (see How RenTec Made More Than $34 Billion In Profits Since 1998: “Fictional Derivatives“)

From Wall Street on Parade:

Broeksmit’s name first emerged in yesterday’s Senate hearing as Senator Carl Levin, Chair of the Subcommittee, was questioning Satish Ramakrishna, the Global Head of Risk and Pricing for Global Prime Finance at Deutsche Bank Securities in New York. Ramakrishna was downplaying his knowledge of conversations about how the scheme was about changing short term gains into long term gains, denying that he had been privy to any conversations on the matter.

Another exhibit released by Levin was an August 25, 2009 email from William Broeksmit to Anshu Jain, with a cc to Ramakrishna, where Broeksmit went into copious detail on exactly what the scheme, internally called MAPS, made possible for the bank and for its client, the Renaissance Technologies hedge fund. (See Email from William Broeksmit to Anshu Jain, Released by the U.S. Senate Permanent Subcommittee on Investigations.)

At one point in the two-page email, Broeksmit reveals the massive risk the bank is taking on, writing: “Size of portfolio tends to be between $8 and $12 billion long and same amount of short. Maximum allowed usage is $16 billion x $16 billion, though this has never been approached.”

Broeksmit goes on to say that most of Deutsche’s money from the scheme “is actually made by lending them specials that we have on inventory and they pay far above the regular rates for that.”

It would appear that with just months until the regulatory crackdown and Congressional kangaroo circus, Broeksmit knew what was about to pass and being deeply implicated in such a scheme, preferred to take the painless way out.

The question then is just what major regulatory revelation is just over the horizon for Deutsche Bank if yet another banker had to take his life to avoid being cross-examined by Congress under oath? For a hint we go back to another report, this time by the FT, which yesterday noted that Deutsche Bank will set aside just under €1bn towards the numerous legal and regulatory issues it faces in its third quarter results next week, the bank confirmed on Friday.

In a statement made after the close of markets, the Frankfurt-based lender said it expected to publish litigation costs of €894m when it announces its results for the July-September period on October 29.

The extra cash will add to Deutsche’s already sizeable litigation pot, where the bank has yet to be fined in connection with the London interbank rate-rigging scandal.

It is also facing fines from US authorities over alleged mortgage-backed securities misselling and sanctions violations, which have already seen rivals hit with heavy fines.

Deutsche has also warned that damage from global investigations into whether traders attempted to manipulate the foreign-exchange market could have a material impact on the bank.

The extra charge announced on Friday will bring Deutsche’s total litigation reserves to €3.1bn. The bank also has an extra €3.2bn in so-called contingent liabilities for fines that are harder to estimate.

Clearly Deutsche Bank is slowly becoming Europe’s own JPMorgan – a criminal bank whose past is finally catching up to it, and where legal fine after legal fine are only now starting to slam the banking behemoth. We will find out just what the nature of the latest litigation charge is next week when Deutsche Bank reports, but one thing is clear: in addition to mortgage, Libor and FX settlements, one should also add gold. Recall from around the time when the first DB banker hung himself: it was then that Elke Koenig, the president of Germany’s top financial regulator, Bafin, said that in addition to currency rates, manipulation of precious metals “is worse than the Libor-rigging scandal.”

It remains to be seen if Calogero’s death was also related to precious metals rigging although it certainly would not be surprising. What is surprising, is that slowly things are starting to fall apart at the one bank which as we won’t tire of highlighting, has a bigger pyramid of notional derivatives on its balance sheet than even JPMorgan, amounting to 20 times more than the GDP of Germany itself, and where if any internal investigation ever goes to the very top, then Europe itself, and thus the world, would be in jeopardy. 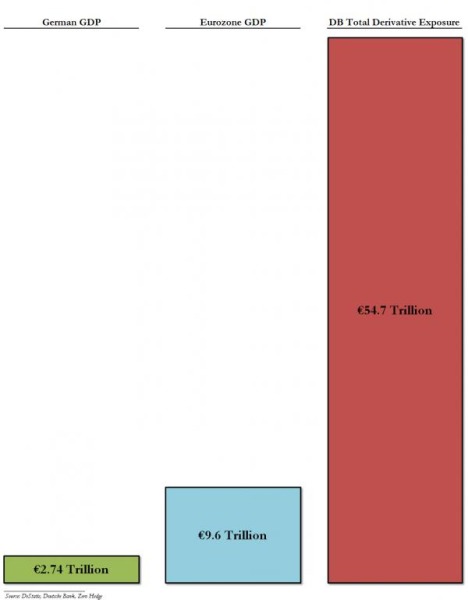 At this point it is probably worth reminding to what great lengths regulators would go just to make sure that Deutsche Bank would never be dragged into a major litigation scandal: recall that the chief enforcer of the SEC during the most critical period following the great crash of 2008, Robert Khuzami, worked previously from 2002 to 2009 at, drumroll, Deutsche Bank most recently as its General Counsel (see “Robert Khuzami Stands To Lose Up To $250,000 If He Pursues Action Against Deutsche Bank” and “Circle Jerk 101: The SEC’s Robert Khuzami Oversaw Deutsche Bank’s CDO, Has Recused Himself Of DB-Related Matters“). The same Khuzami who just landed a $5 million per year contract (with a 2 year guarantee) with yet another “law firm”, Kirkland and Ellis. One wonders: if and when the hammer falls on Deutsche Bank, will it perchance be defended by the same K&E and its latest prominent hire, Robert Khuzami himself?

But usually it is best to just avoid litigation altogether. Which is why perhaps sometimes it is easiest if the weakest links, those whose knowledge can implicate the people all the way at the top, quietly commit suicide in the middle of the night…