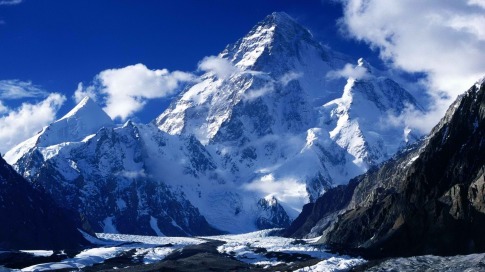 Scientists struggle to explain it (Look out! Here comes the spin!)

In the mountainous Karakoram region of Asia the glaciers aren’t melting. If anything, some are expanding, says this article on LiveScience.

“It’s been a source of controversy that these glaciers haven’t been changing while other glaciers in the world have,” said study researcher Sarah Kapnick, a postdoctoral researcher in atmospheric and ocean sciences at Princeton University.

In the Karakoram region — part of the larger Himalaya mountain chain — snowfall is decreasing in the summer but increasing in the winter, she said. This snow presumably feeds Karakoram’s glaciers, keeping them from retreating.

Because previous models overestimated the temperature of the Karakoram, they also underestimated the amount of snow in the region. This is the crux of the mysterious Karakoram anomaly, the researchers report (Oct. 12) in the journal Nature Geoscience.

The reason, she said, is that the IPCC and other climate models are lower-resolution, capturing climate change over areas no finer than about 17,027 square miles (44,100 square km).

Her group’s new model simulates climate down to an area of 965 square miles (2,500 square kilometers).

“This (supposedly) gives a reasoning for why you can have increased snowfall in a region and have increased glaciers or stable glaciers in a warming world,” Kapnick explains.

Often considered a part of the Himalayas, the Karakoram range, which runs through Pakistan, India and China, is technically a separate chain that includes K2, the world’s second-highest peak.

Thanks to Kingbum for this link

I wrote about glaciers growing in the Karakoram Range back in April of 2012:
Glaciers on Asia’s largest mountain range getting BIGGER
Although there were wide variations between individual glaciers, the mass of the glaciers in this 2,168-square-mile (5,615-sq-km) area has been increasing.
http://iceagenow.info/2012/04/glaciers-asia%E2%80%99s-largest-mountain-range-bigger/

See also:
Himalayas have lost no ice in past 10 years, study shows
http://iceagenow.info/2012/02/himalayas-lost-ice-10-years-study-shows/