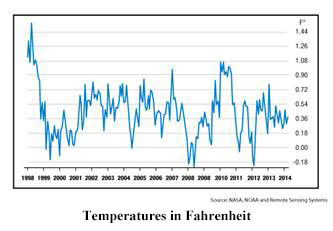 “The problem with that argument is that we experienced the bulk of that warming between 1979 and 1998 . . . since then, we’ve actually had temperatures DROPPING!

As can be seen in this chart, we haven’t seen any global warming for 17 years.”

You’ve heard how the Earth is rapidly heating up . . . causing drought, famine, and mayhem.

For sure, Al Gore and the media encourage you to jump on the global warming bandwagon every time there is a heat wave or when a photo of a lone polar bear floating on an iceberg emerges.

But how much has the world really warmed?

It’s an important question, considering the U.S. government spends $22 billion a year to fight the global warming crisis (twice as much as it spends protecting our border).

So, has anyone stopped to ask . . . how much has the globe actually warmed?

Well, we asked, and what we found was striking.

According to NASA’s own data via Remote Sensing Systems (RSS), the world has warmed a mere .36 degrees Fahrenheit over the last 35 years (they started measuring the data in 1979).

Hardly anything to panic about; however, that does mean the world is warmer, right?

The problem with that argument is that we experienced the bulk of that warming between 1979 and 1998 . . . since then, we’ve actually had temperatures DROPPING!

As can be seen in this chart, we haven’t seen any global warming for 17 years.

Weakening the global warming argument is data showing that the North Polar ice cap is increasing in size. Recent satellite images from NASA actually reflect an increase of 43% to 63%.

This is quite the opposite of what the global warming faction warned us.

In 2007, while accepting his Nobel Prize for his global warming initiative, Al Gore made this striking prediction, “The North Polar ice cap is falling off a cliff. It could be completely gone in summer in as little as seven years. Seven years from now.”

Al Gore could not have been more wrong.

However, despite this clear evidence that the temperatures are not increasing, the global warming hysteria only seems to be increasing.

For example: President Obama himself tweeted on May 16, 2014: “97% of scientists agree: climate change is real, man-made and dangerous.” John Kerry, Al Gore, and a host of others have championed this statistic.

Since then, it has become clear that this statistic was inaccurate.

The Wall Street Journal went as far as to say, “The assertion that 97% of scientists believe that climate change is a man-made, urgent problem is a fiction.” Forbes headlined “Global Warming Alarmists Caught Doctoring ’97% Consensus’ Claims.”

Come to find out, the study President Obama was citing was botched from the start.

A host of other problems for the global warming crowd are emerging, such as . . .

It is becoming harder and harder for the global warming community to ignore some of the scientific data that show the Earth is not getting warmer . . . instead, the world is getting cooler.

Which makes one wonder — why are we still spending $22 billion a year on global warming initiatives, and where is the money going? (Click Here to Read a Controversial Report on This Topic.)

4 thoughts on “There Is No Global Warming”