Federally mandated organic standards state that living conditions for livestock must “accommodate the health and natural behavior of animals.” This means that both cows and chickens absolutely must have year-round access to green pastures for grazing, shade, sunlight and fresh water and live unconfined, Cornucopia reports.

Temporary confinement is only allowed to provide safety, treat illness or injury and because of bad weather and risks to soil or water quality. Satellite imagery allows the watchdog group to detect and report operations violating these standards.

An aerial photo taken of Aurora Dairy’s “organic” farm in Stratford, Texas, shows thousands of cows confined to dirt-based feedlots with no opportunity to graze on green grass. The nearby fields have been freshly mowed with the feed already baled for future use, notes Cornucopia.

“We see thousands of cows at this operation without any pasture as organic law requires,” said Mark Kastel, Cornucopia’s Senior Farm Policy Analyst.

Aurora Dairy insists that “[h]igh standards for animal care are the cornerstones” of their farm and that their cows eat organic pasture and feed. Their website substantiates these lies by using pictures of seemingly happy cows grazing in green pastures.

“We intend to use these photos to demonstrate, where applicable, how and why organic regulations are being broken”

Another disturbing photo taken by Cornucopia shows a massive egg-laying facility in Texas with an absence of chickens outside the rows of barns, where instead tens of thousands of birds are confined. The images reveal that, even if the chickens were allowed outside, there’s nowhere near enough land for them to graze, making the facility “totally inappropriate” for their density. 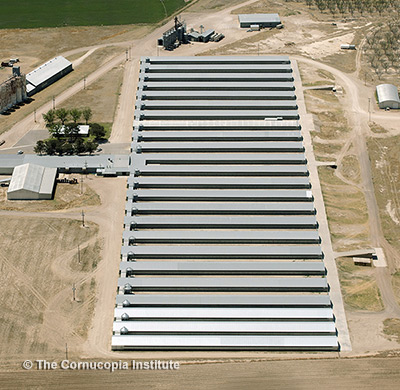 Confinement-style factory farms continue to persist despite the passage of “new regulatory benchmarks” instated by consumer demand. “These giant operations have become widespread and dominant in egg production, and continue to produce a significant amount of the organic milk,” says Cornucopia.

When questioned about these operations, the USDA maintains that such facilities are complying with federal organic law, but the watchdog group highly disagrees.

“The head of the USDA’s National Organic Program, Miles McEvoy, told me he had personally visited some of the huge complexes located in Texas that we photographed,” said Kastel.

“And he further told me that, and I quote: ‘all the farms we visited in Texas were in compliance.'”

If the USDA fails to enforce its laws, Cornucopia says it will likely end up battling these operations in court; however, results could take years.

“We will continue to protect the interests of ethical organic farmers and their dedicated customers who choose food from animals that are cared for in a humane manner resulting in nutritionally superior products.”

Cornucopia’s researchers have created scorecards grading brands of organic egg, dairy, soy foods and other products. To view, visit their website and click on “scorecards.”