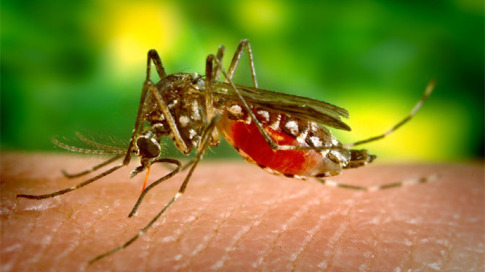 Like Ebola, yellow fever is an acute viral hemorrhagic disease. However, instead of being spread by bodily fluids, it is carried in the salivary glands of a mosquito. The ‘yellow’ in the name refers to the jaundice that affects some patients, according to the World Health Organization. The virus is endemic in tropical areas of Africa and Latin America, and there are an estimated 200 000 cases of yellow fever, causing 30 000 deaths, worldwide each year, with 90 percent occurring in Africa.

Dengue virus is a leading cause of illness and death in the tropics and subtropics, mostly in urban and semi-urban areas, with as many as 400 million people infected yearly, the US Centers for Disease Control and Prevention reported. The infection causes flu-like illness, and occasionally develops into a potentially lethal complication called severe dengue (also known as Dengue Haemorrhagic Fever), according to the WHO.

Chikungunya is a viral disease that causes fever and severe joint pain. Other symptoms include muscle pain, headache, nausea, fatigue and rash, similar to dengue, which can cause misdiagnosis in areas where both viruses are common. Since 2004, chikungunya fever has reached epidemic proportions, with considerable morbidity and suffering, the WHO said. Most patients recover fully, but in some cases joint pain may persist for several months, or even years. Occasional cases of eye, neurological and heart complications have been reported, as well as gastrointestinal complaints. Chikungunya occurs in Africa, Asia and the Indian subcontinent.

The first reported case of chikungunyain the US was reported July 17 in Florida. “This newly reported case represents the first time that mosquitoes in the continental United States are thought to have spread the virus to a non-traveler,” the CDC announced.

Now the viruses spread by the yellow fever mosquito could potentially arrive clear across the country from Florida.

“While these debilitating viruses, so far, aren’t locally transmitted in LA County, the mosquitoes that can transmit them are now here,” Susanne Kluh, director of scientific-technical services, said in a statement. “Infected travelers can bring these viruses to Los Angeles County.”

“This is the latest in a series of identified mosquito introductions into the southland,” Levy Sun, the GLACVCD’s public information officer said in the district’s joint statement with SGVMVCD.

The Aedes aegypti species, better known as the yellow fever mosquito, has black and white stripes and grows to about a quarter-inch in size. It is primarily a forest species that has become adapted to rural, suburban and urban human environments. In recent decades Aedes albopictus has spread from Asia to Africa, the Americas and Europe, notably aided by the international trade in used tires as mosquitoes deposit their eggs in tires containing rainwater, the WHO said.

The Aedes albopictus species ‒ the Asian tiger mosquito ‒ is a native of Southeast Asia, and was first identified in El Monte and South El Monte, Calif. in September 2011. Since then, this mosquito has spread to 10 neighboring cities despite aggressive measures to eradicate the population, the vector control districts said. It also spreads dengue, chikungunya and yellow fever.

The Australian backyard mosquito (Aedes notoscriptus), a native of Australia, was found in two neighborhoods in Montebello and Monterey Park this summer. It can transmit canine heartworm and is the primary transmitter of the Barmah Forest and Ross River viruses in Oz.

All three mosquitoes are aggressive day-biting mosquitoes that thrive in urban environments because they prefer to lay eggs in small man-made containers that hold water.

“Both agencies have specialized teams that target these invasive species,” said Jason Farned, public information officer at SGVMVCD. “We’re aggressively attacking the populations wherever we find them.”

Officials are asking residents to report any sightings of the small, black-and-white mosquitoes, especially if someone is bitten during the day. They are also requesting people dump and drain all stagnant water, and to “thoroughly scrub” places susceptible to standing water on a weekly basis.

The districts have not determined how the yellow fever mosquito or either of the other disease-transmitting biters arrived in California. Along with imported tires, plants are typically to blame, officials noted. The bugs can also travel via planes, ships and other vehicles.

Be afraid, be very afraid!

… unless you are Bill Gates …

Yet, the one you really should be afraid of is Bill Gates:

But then viruses cannot enter a healthy cell (See the work of Dr. Bruce Lipton)

Get a a slow-juicer, that doesn’t kill the enzymes and start drinking fresh green juices every day and change your diet.