“A twofor…..a global cull AND they get the gas

And now sending troups to Liberia makes so much more sense, … 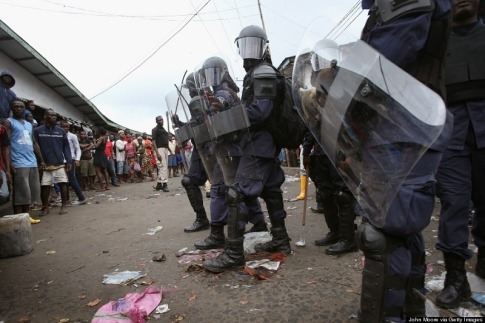 Travelling on 6 US military planes, an estimated 4,000 combat-ready troops have arrived in Liberia, the hardest hit by the Ebola virus.

Major General Darryl Williams explained: “The fleet of planes that landed outside the Liberian capital of Monrovia consisted of four MV-22 Ospreys and two KC-130s. The 100 additional Marines bring to just over 300 the total number of American troops in the country.”

One task of the US troops in Liberia is to begin building “medical centers”; while British Defense Secretary Michael Fallon stated that the UK are providing 750 soldiers to assist in the construction of “treatment centers and an Ebola training academy”.

Military engineers and “planners” have been setting up the foundation of the mission over the last month in Sierra Leone.

As the troops landed, Sierra Leone President Ernest Bai Koroma told the audience at the “Financing Development Post-2015: Towards a Shared Vision” (DP2015) hosted by the World Bank (WB): “Our people are dying. “[The epidemic] a tragedy unforeseen in modern times.”

Bai continued: “The world wasn’t responding fast enough as children are becoming orphans and doctors and nurses are dying in vain efforts to help the sick.”

In Sierra Leone, Bai explained the manufacturing, tourism and transportation are among the economic avenues being harmed by Ebola.

The WB said that the Ebola outbreak “could have disastrous effects on” Liberia’s economy.

To ensure the Liberian economy does not collapse. the International Monetary Fund and the WB are devising a plan to assist monetarily in the securing of current schemes to extract petrol and natural gas from the country to boost their export opportunities.

Simultaneously, ExxonMobil (EM) has been complaining that their natural gas and petrol extraction efforts off the shores of Liberia are fluctuating between “gains and losses” because of the Ebola outbreak in the area.

According to a spokesperson for EM, the corporation has “delayed drilling the first exploratory well off Liberia’s coast due to concerns related to the Ebola outbreak” and “restricted non-essential travel to countries affected by the outbreak.”

According to EM the Ebola threat is “fairly low level”; even though they are in Liberia, known as the “hardest hit” area.

Rex Tillerson, chief executive officer for EM told the press: “We had some drilling plans for some blocks offshore West Africa in Liberia. We are having to look at when it would be prudent to resume operations there because you do have to have shore-based support.”

Tillerson is adamant that in Liberia, “there is enough energy in the ground right now to supply the needs of the U.S. for the next 100 years, and we can get to it economically.”

The CEO of EM said: “Industry technologies have now put within reach enough natural gas to help power the US economy at its current demand for more than a century. Sources of oil and natural gas, long-dismissed as uneconomic and inaccessible are being transformed into energy supplies that are successful, reliable, and competitive.”

ExxonMobil Exploration (EME) and Production Liberia Limited (PLL) were given the green light by Liberia President Ellen Johnson Sirleaf back in April of 2013.

Within the last week, EM has donated $150,000 to the Liberian National Red Cross Society (LNRCS) to fund the organization’s “response team” which is the Liberian government’s premier method of fighting Ebola.

Nathaniel Jallah, manager of public and government affairs for EM’s Liberian subsidiary said: “[We] “support the Red Cross, other international aids organizations and the government in their efforts to eradicate Ebola in Liberia.”

2 thoughts on “US Troops, World Bank And IMF Set The Stage For Liberian Resource Extraction”