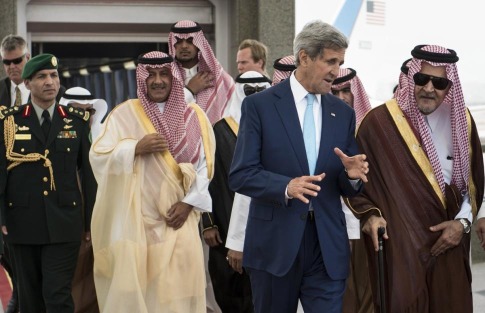 We first exposed the “secret” US-Saudi deal in September which led to the inevitable bombing of Syria. We then progressed to explain the quid pro quo of the deal in lower oil prices (benefiting US consumers into an election and crushing Russian revenues). In today’s Wall Street Journal we get the final piece of the puzzle as it is clear that what Saudi Arabia loses in ‘price’ it will make up in ‘volume’ as The Kingdon is taking the unusual step of asking buyers to commit to maximum shipments if they want to get its crude. Simply put, “they are threatening [European] buyers” to discontinue sales if they don’t agree with the full fixed deliveries. The ‘oil weapon’ grows stronger…

As The Wall Street Journal explains,

The kingdom is taking the unusual step of asking buyers to commit to maximum shipments if they want to get its crude.

“The Saudi push is not just in Asia. It’s a global phenomenon,” one oil trader said. “They are using very aggressive tactics” in Europe too, the trader added.

This month, state-owned Saudi Aramco stunned the rest of the Organization of the Petroleum Exporting Countries by slashing its November prices to defend its market share in Asia’s growing market. The move, setting a price war in the oil-production group, was combined with a boost in the kingdom’s output in September.

But Riyadh is also moving to protect its sales to Europe, a declining market where it is facing rivalry from returning Libyan production.

After cutting its November prices there, Saudi Aramco is also asking refiners to commit to full, fixed deliveries in talks to renew contracts for next year, the traders say. They say the Saudi oil company had previously offered a formula allowing flexibility of more or less 10% of contracted volumes, the most commonly used in the industry.

“They are threatening buyers” to discontinue sales if they don’t agree with the fixed deliveries, another trader said.

Of course, the more pressure ths US (prxied by Saudi Arabia) puts on Russia (and Iran) and implicitly Europe now (as they are forced to buy ‘more’ oil than needed, albeit at lower prices – but leaving their budgets bursting still further), the more the rest of the world is forced to consider alternatives to US hegemony and side with those that, for now, have not reached peak totalitarianism.