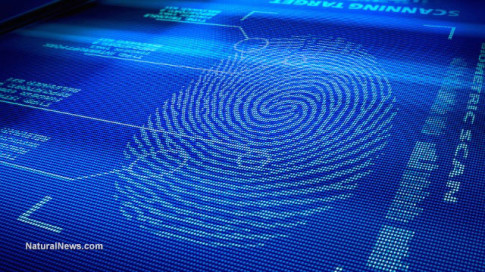 – UK school to fingerprint children like criminals in order to monitor their diets (Natural News, Sep 29, 2014):

In another stellar example of the nanny state run amok, a public school in Britain has taken to fingerprinting students so officials there can keep an eye on what they are eating.

According to the Express & Star, a British newspaper, the Redhill School in Stourbridge is introducing a controversial (and costly) new biometric system “as part of a plan to implement a cashless system throughout the school.”

In order for students to be able to purchase their meals, they will be required to have their fingerprints read by a machine, which then converts the fingerprint into biometric data, which is then used to identify each pupil’s account.

The paper further reported that the plan was detailed in a letter sent out in August to the parents of some 1,200 students who attend the school. The school’s principle, Stephen Dunster, said the biometric readers were part of a long-term plan to enable parents to pay for all school-related fees online.

“We are aiming to have a cashless system throughout the school,” he said, according to the paper. “The catering system is better for parents because they don’t have to provide children with lunch money every morning. From our perspective it is far more efficient as it reduces waiting times.”

‘No, we don’t keep the biometric data’

But Dunster went on to say that the biometric system has other purposes as well: “We will also be able to monitor what children are buying to make sure they are eating a healthy diet.”

School officials say the system is scheduled to go live in November. A change in British law in 2013 requires schools to consult with parents before bringing in the biometric technology.

In addition, the paper said, the law also lets parents refuse to allow the school to fingerprint their children.

Nearly half of the local surrounding secondary schools are already using a form of biometric systems. However, such use has come under criticism from civil liberties groups who warn that the information taken by the devices could wind up being stored in school (or other) databases.

Dunster said that would not be the case, however.

“We don’t hold fingerprints on file. This is about using technology to benefit our pupils and parents,” he told the paper.

Kyle Olson, founder of the Education Action Group in the United States, said similar technology, like palm readers, have been tried in America, but technological glitches — and parental anger — have largely quelled their use:

Washington’s Puyallup School District spent $38,695 on devices that would map the veins in a student’s palm, and then use that data as a school lunch account identifier.

“If the school district needs my signature in order to obtain my daughter’s photograph and use that photograph in publication because of a privacy issue, then I believe I should have to sign an authorization to use my child’s identity… for them to do that,” said parent Christina Allen, EAGnews reported.

“To hear those words vein recognition program… it’s very invasive to me,” she added.

Biometric classrooms of the future to track everything students do

In the end, the school district wound up pulling the program, because so many parents complained.

“We failed at communication significantly on this,” school board president Chris Ihrig told the News Tribune of Tacoma. “We got an ‘F’ on this one.”

Yahoo! News reported that, in 2013, a group of New York engineers announced that they had developed a “biometric classroom.” The report read, in part:

Students listen up! If you are used to passing notes, tapping out texts or even sneaking in quick conversations when you’re supposed to be working on fractions…beware! Those kinds of activities could be a thing of the past – or at the very least, closely monitored – in the biometric classroom of the future.

Developers of the classroom, SensorStar Labs, claim that cameras track students’ eye movements, conversations and even their emotions (like smiles) — all ostensibly to help teachers improve the learning environment.