We have yet to read Owen Jones’ “The Establishment… And how they get away with it“, although Russell Brand’s take of the author has certainly piqued our interest: ”Owen Jones may have the face of a baby and the voice of George Formby but he is our generation’s Orwell and we must cherish him.” We do know, however, that the young author and Guardian columnist is one of those who are not afraid to think critically while accepting there is far more than meets the eye, and certainly than the controlled media would like revealed. To wit, from the book’s official blurb:

Behind our democracy lurks a powerful but unaccountable network of people who wield massive power and reap huge profits in the process. In exposing this shadowy and complex system that dominates our lives, Owen Jones sets out on a journey into the heart of our Establishment, from the lobbies of Westminster to the newsrooms, boardrooms and trading rooms of Fleet Street and the City. Exposing the revolving doors that link these worlds, and the vested interests that bind them together, Jones shows how, in claiming to work on our behalf, the people at the top are doing precisely the opposite. In fact, they represent the biggest threat to our democracy today – and it is time they were challenged.

The following infographic from the book, showing “how the media controls Britain” reveals the schism between popular British sentiment about key social issues courtesy of media influences and reality, indicating that the “establishment” is more than happy to sow discord within the working/middle classes using its traditional “objective” distribution channels, while it remains aloof, collecting the rent its record capital provides. 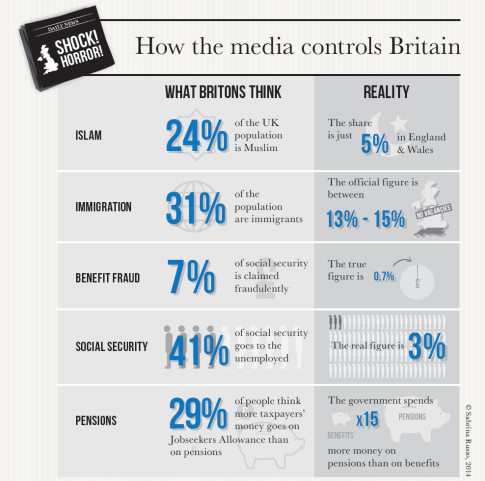 And while the middle class around the world fights for scraps, and has seen its real wages over the past three decades largely unchanged, the “establishment”, wrapped in a comfortable cocoon spun by the captured media, benefits:

1 thought on ““How The Media Controls Britain””