Once again, the Zionists have created a distraction hoax on a grandiose scale. These arch-perpetrators would do anything conceivable to demonize Islaam in the Western public eye, therefore the concentration on beheading hoaxes aimed at Westerners. Now, the fabrications have taken a new turn with the Zionist-predicted claim of ISIS beheadings ‘coming true’ on American soil, although it is all fake. “Let us strike the Bible Belt, the Heartland,” the Zionists schemed, “with our next hoax.” This was done with the false beheading of a Oklahoma woman as well as an additional fake stabbing.

Alton Nolen, the man accused of beheading his Oklahoma co-worker Friday, is a hired crisis actor, an absolute fake, just as is the supposed victims of the acclaimed violence. He supposedly has “a Muslim tattoo on his chest.” What in the world is a Muslim tattoo? Disfiguring the body is prohibited in Islaam. Did he pick and choose the rules on his own? He’s a tattoo-bearing fanatical Muslim who no one in the world knows about, including all the Muslim people in Oklahoma.

Being “stabbed” fatally is not the same as beheading, except in the Zionist’s false world. Regardless, the entire event reeks of a fake. Notice this crisis actor phony, hiding her face from the camera – or doing the standard routine of the hand-to-the face act. The woman is obviously a fake, perpetrating her act for pay. Notice the crisis actors standing next to her, one of them likely being a coordinator. Even so, it doesn’t just reek. It stinks of nothing other than the standard Zionist Islamophobic plot. 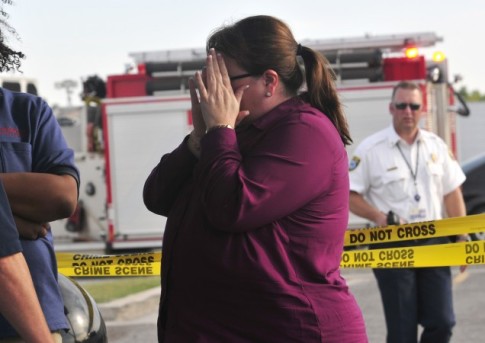 According to the Zionist-controlled DailyCaller Nolen has a tattoo on his abdomen reading “AS-SALAAMU ATAIKUM,” according to (that is quoting) Oklahoma Department of Corrections records. Notes the Caller: “The Arabic message, essentially meaning “peace be upon you,” is used as a greeting by Muslims.”

***
OK; now we know it. As-Salaamu-aTaikum, not as-salaamu alaikum, that his they hoaxers couldn’t even spell it right. Even so, what difference does it make? There is no way this man or any other is going to tattoo this on his body, and how convenient it is that this makes national news. It’s ridiculous; how is such a tattoo deemed actual evidence of anything? Yet, the lies, grotesque as they are, continue:

After he was fired, Nolen beheaded a 54-year old female co-worker and stabbed another co-worker, who is currently hospitalized, before being shot and injured by police.
*** ***
Yet, in other reports it was the owner of the food entity itself which shot him. It is merely a litany of lies. Furthermore, it’s an easy one to prove as a terminally corrupt scam, showing the dire desperation of the Zionists to maintain their system of public intimidation, that is the one they are attempting to apply by the perpetration of such hoaxes.

Moreover, as is the standard there is the villain but there is also, in contrast, the hero, though both of them are always fakes: 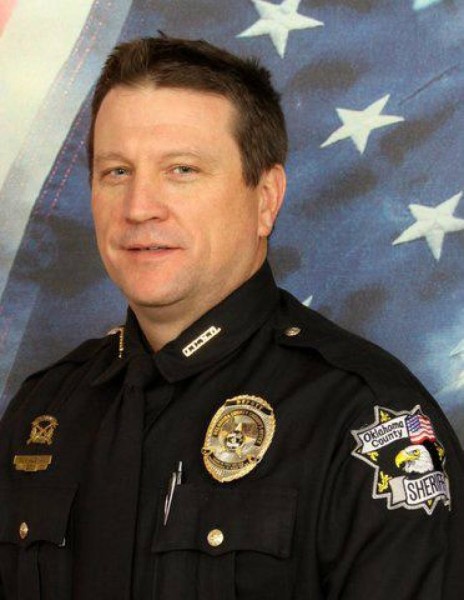 First it was the owner, now it is a reserve deputy who is the story line’s hero.

Notice what is the most crisp element of the photo. It is not the face, which should be the subject of focus. Instead, it is the cloth bag or insignia, which reads “Oklahoma County Sheriff.” There are what appear to be marks from the Photoshop blur tool on the front of the hair, near the forehead line and also on the right aspect (left screen). Why touch this photo up with Photoshop if this was a real event? The flag, too, appears to be a computer graphic installation. 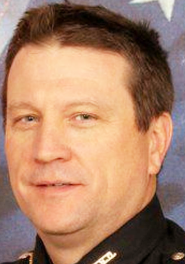 Note what appears to be the use of the blur tool on the hair tufts in the front at the forehead line.

Nolen was last released from prison in March 2013, so he has had the tattoo longer than some news reports, which said that he only recently converted to Islam, would suggest. Nolen served slightly less than two years for a conviction on a drug charge.
In October 2010, Nolen led state troopers on an overnight manhunt on an Oklahoma highway that involved helicopter surveillance. Nolen, then 26, had a P.O. box as his permanent address and previous drug arrests.

A P.O. Box? The man doesn’t have a home? Can’t the police isolate the criminal to a specific address?

Once again, by the Zionist’s own wretched acts their plot is made clear. This is the continuous demonization of the grand, divinely-originating faith of Islaam. Towards the end of the Prophet of this faith’s missions it was stated in the Qur’aan: “Today, I have perfected your religion (actually, way of life), which is Islaam,” in other words, “peaceful submission before Me.” 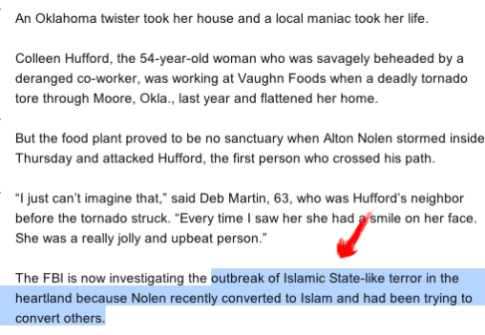 Sure it was. Yea – it was a local Islamist who would kill people because they won’t convert to Islaam. Sure: the only faith in existence which holds as one of its key mottos: “There shall be no compulsion in matters of faith.”

Nolen’s presumed sister is an Islaamic terrorist, too; sure she is:

But NewsOK, the web operation of the Oklahoman newspaper, snagged a Facebook statement from a woman they believe is Nolen’s sister. They did not identify her.

“He is alive and doing well,” the message read. “Thanks to all praying warriors out there friends and family. To god be the glory! My bro is alive and just know that the devil is a lie. Please continue prayers.”

The post is obviously a fake, done by a mole or spy working on behalf of the Zionists.

The Islamic Council of Oklahoma said they had NOT heard of Nolen before the deadly attack” and that he is “not known to any of the leadership in Oklahoma mosques…”, said one spokesperson. He was obviously invented virtually out of thin air. It all represents hard proof of Islamophobia, which is the Zionists’ crutch. Without the false representation of this phobia the world will have no choice but to see the real terrorists for who they are: Zionist Jews.

THEREFORE, the entire basis of this hoax is hereby revealed, which is to create a virtual war against people of Islaam in this country. This is through making them appear as demonic, to quote the Zionist press “maniacs.” Yet, what is a person to do? The popular press is owned in total by vile arch-Zionist elements. They publish any lie they deem to spew.

This is a horribly crafted hoax. As soon as possible a more in-depth assessment will be published.