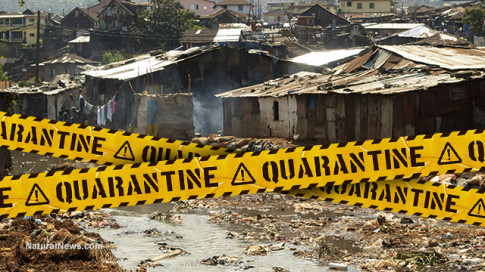 High-density population areas of Sierra Leone have just been locked down in the largest pandemic quarantine in history, and it’s already causing a collapse of the food delivery infrastructure. The local government says forced isolation orders will remain in effect until Ebola is eradicated. This essentially means that millions of people are now under a state of military quarantine until they either become immune to Ebola or die from it.

“President Ernest Bai Koroma put Port Loko, Bombali, and Moyamba districts under isolation with immediate effect, allowing only people delivering essential services to enter and circulate within these areas,” reports Associated Press. [1] “The restrictions will remain in place until the chain of transmission is broken, officials said.”

AP goes on to report:

Sierra Leone on Thursday took the dramatic step of sealing off districts where more than 1 million people live as it and other West African countries struggle to control the Ebola outbreak that has claimed thousands of lives.

The food delivery infrastructure of Sierra Leone has now collapsed

Predictably, the enforcement of quarantines across Sierra Leone have caused a collapse in that nation’s food delivery infrastructure. This, of course, is causing food prices to skyrocket:

“…food prices have soared, some markets have shut and the delivery of goods has slowed,” reports AP.

It’s classic supply and demand, of course, and it’s a universal phenomenon. That means it will also happen in the United States, Europe, Canada or anywhere else a quarantine is put into effect.

Six harsh lessons in the reality of food shortages and quarantines

By observing the reality of what is unfolding in Sierra Leone, Liberia and Guinea, we are learning several extremely valuable lessons:

Lesson #1: The preppers have always been right

If you aren’t stockpiling food supplies for your own home, community or church, you’re crazy. Food shortages happen almost immediately in any quarantine scenario. The preppers have been right about this all along, of course.

Food deliveries require the ability of both people and transportation vehicles to move freely across a region or nation. When that freedom to remove is restricted, food deliveries cease. This, of course, results in almost immediate food shortages.

Lesson #3: If you are caught in a quarantine zone, you will not be allowed to escape, even if the pandemic gets far worse

The entire purpose of a quarantine zone is to “halt the chain of transmission” of the disease. For this reason, even healthy, non-infected people will be forced to remain in the quarantine zone indefinitely. Remember the movie “Escape from New York” with Kurt Russell? Governments will shoot those trying to escape.

Lesson #4: If food is not brought in from outside the quarantine, those inside the boundaries will starve to death

There is zero warning that a quarantine is going to be announced in your city or neighborhood. They are announced and enforced with a sense of military immediacy for precisely the reason that they don’t want people escaping and spreading the disease! Thus, you have no chance to bug out before the lockdown goes into effect.

Lesson #6: Your plan to “bug out” to a rural location is suddenly useless

Many Americans currently live in cities while maintaining bug out plans that will relocate themselves and their families to rural locations. These plans are useful in certain situations where warnings can be detected in advance, but they are useless in a sudden military quarantine. If you are caught inside the quarantine boundaries when the lockdown is announced, you’re already too late.

For this reason alone, actually living at your bug out location is a superior strategy if you have the funds to move away from the city (and leave behind the higher wages the cities offer).

By the way, I publicly predicted all this in advance in my free online audio course Pandemic Preparedness at www.BioDefense.com

Listen to the course now if you want to survive any pandemic.

Sources for this story include:
[1] http://hosted.ap.org/dynamic/stories/E/EBOLA…