A few days ago we showed how when Obama said there would be “costs” for Moscow in the Ukraine-Russian conflict, he got the recipient country of said costs woefully wrong, as confirmed by the economic data released by Ukraine which showed its Industrial Production crater at a pace on par with the Lehman collapse, confirming the Ukraine economy was on the verge of a spectacular implosion just in time for the harsh, Gazprom-free winter to finish off what little economic activity is left. 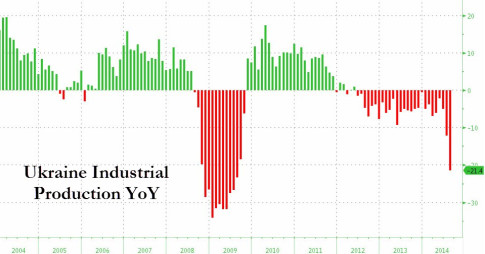 The resulting selloff in the Hryvnia and Ukraine bonds, was therefore, hardly surprising.

Which probably means the news reported by Bloomberg moments ago, which cites Ukraine’s Unian news service, that the Ukraine central bank just instituted restrictions on Hryvnia use, i.e., capital controls, should also not come as a surprise, yet for all those expecting Russia to crater first under the weight of western sanctions, to see said cratering take place in western-backed (and IMF guaranteed) Ukraine is probably just a little unpleasant.

In other words, the money concentration into a select few government-approved (and controlled) asset classes has begun. For those who are unsure what happens next, please google “Cyprus and March 2013.”