– Quantitative Proof The Fed Is Destroying The Middle Class (Voices of Liberty, Sep 19, 2014):

Listening to pundits on television, one would think we’ve found a magical species of leprechauns that piss gold rainbows amongst the masses and so we need never again worry about the economy, the markets and whether or not things are improving. And looking at the market’s six-year run to all-time highs, perhaps such euphoria is warranted.

I mean, isn’t the market supposed to be a highly efficient gauge of the underlying economy? The market is a function of expected future cash flows based on demand, supply and productivity. If true, and if the market is at all-time highs, then things must be good, correct?

Let’s look into this proposition. Under historical, normal conditions the market has been a very efficient gauge of the underlying economy. However, these are not normal times and we have unprecedented monetary policies in place. As such, we need to confirm whether or not markets are functioning the same way today as they do in normal times. Specifically we need to confirm that the unprecedented money printing and the Fed targeting higher stock prices haven’t impeded the markets ability to gauge the underlying economy.

Now it’s very difficult to know exactly how much money has been printed since the beginning of the last collapse. I’ve heard figures close to $100 trillion (T) if you consider all of the bailouts globally. But looking at a conservative figure based on M2 money supply and the Fed’s own balance sheet we come to about $4T or $5T since the middle of 2007. 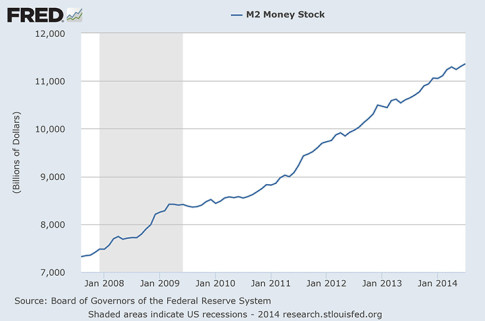 Since the collapse in 2008 we’ve had a first round of quantitative easing (QE1), a program of buying US Treasuries at a rate of hundreds of billions per month, followed by QE2. We are just nearing the end of QE3. In November 2010, then-Fed Chair Ben Bernanke explained the purpose of the purchasing programs was to boost economic growth through lower borrowing costs and higher stock prices. This is the first recovery attempt I am aware of that the Fed is explicitly targeting higher stock prices. The idea is to create a trickle down recovery. High equity values and low borrowing costs increase profitability expectations for capital investments by way of reduced capital costs. As such, prima facie, one would expect an increase in capital investments leading to job creation and increased demand which are the ingredients for a strong economy. From that perspective it seems reasonable that the Fed is doing the right things.

However, we have to remember that at the end of the day corporations are just money allocators like any hedge fund or mutual fund manager. CEOs are sworn to maximize shareholder funds. Understanding this we must expect corporations to invest based on the best risk/reward scenario available to them as we do for any other investors. Herein lies the invalidity of the Fed’s assumptions.

The Fed assumed that low borrowing costs and high equity values would drive corporate fixed capital investment. It did drive investment, but not fixed capital investment. Corporations, like all other investors, realized the stock market was being backstopped by the Fed. This essentially gave all market long side participants a free put option. In other words, the Fed was protecting folks from any downside risk by explicitly stating they were targeting higher stock prices. Thus corporations and everyone else realized the smart money was directly tied to the market.

To understand this more clearly, imagine you are a CEO of a company and you have sworn to make the best use of shareholder funds. Would you spend $1 billion (B) dollars building out new factories, expanding operations and hiring permanent workers under union contracts when the economy is still very unhealthy or would you simply invest that $1B into the stock market which you know the Fed is pushing higher?

When this strategy was first explained back in 2008, I put together a hypothesis that suggested such a strategy would in fact hurt not help economic growth. Given we are six years in, there is sufficient data to test my theory. Allow me to walk through the results. 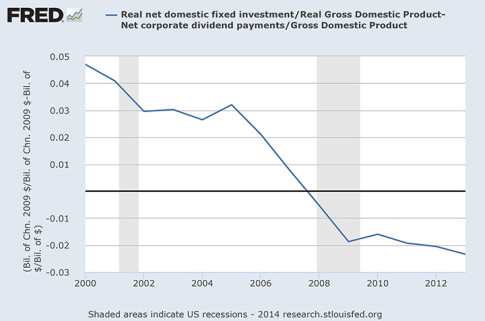 Note the line goes negative, meaning dividend payouts exceed fixed capital investment around the time the Fed’s QE1 program began. Another effect is that we should see increased levels of corporate share buy backs. The reason is the same, however, an added benefit to share buy backs is that they reduce the amount of shares outstanding and thus increase the very important earnings per share ratio. Let’s see if corporate share buy backs did, in fact, increase. Have a look at the following chart. 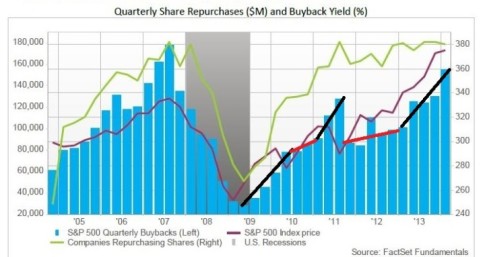 Again the chart supports the theory. You can see the blue bars increase significantly during QE1 all the way through QE3. I’ve added black slope lines to indicate periods of QE and red slope lines to indicate periods between QE programs. I did this to see if, during the QE pauses, there were differences in the rate of increase of the share buy backs. You can see from the chart that buybacks increase at a higher rate (black slopes) during periods of QE than periods between the QE programs (red slopes). So this is all in line with our theory that these QE programs targeting low borrowing costs and higher stock prices led to increased corporate investment directly to the market.

We proved that while the Fed is targeting higher stock prices, money moved away from fixed capital investment and moved into financial markets. But why is this important? I mean, do we really care what CEO’s do with their money? The answer is absolutely and I will show you why. This is where the theory becomes a bit more interesting. I have not seen the following two charts produced or discussed anywhere else.

So this is a premier event folks. Grab your popcorn, sit back and enjoy the show! The theory suggests that allocating funds away from fixed capital investment and into financial markets is a good decision for CEO’s with their microeconomic viewpoints but a very ineffective use of funds from a macroeconomic viewpoint. Given the overall economy is macro by definition we should be able to observe a positive correlation between the first chart above (showing money moving from fixed investment to markets) and M2 money velocity, which represents how effectively we are allocating our money to generate output. Let’s take a look. 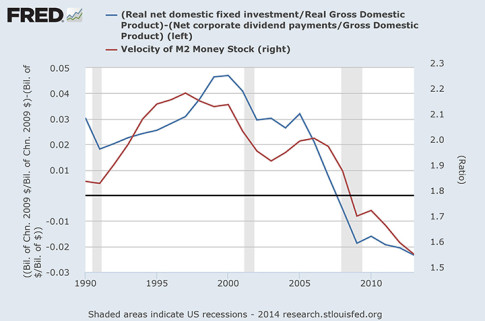 What we find is that as money is reallocated from fixed capital investment into financial markets the economy becomes less and less efficient. As a note, I regressed these two functions and found both statistical significance and very strong explanatory properties (adjusted R^2 of .8). Our theory seems to be getting stronger as we go so let’s not stop here. The theory also attempts to explain this inefficiency. It suggests that, as fixed capital investment declines, we get increasing slack in the job market due to reduced capacity. If this is true, we should also see a correlation between the first chart above and median household incomes which should decline as job market slack increases. Let’s have a look. 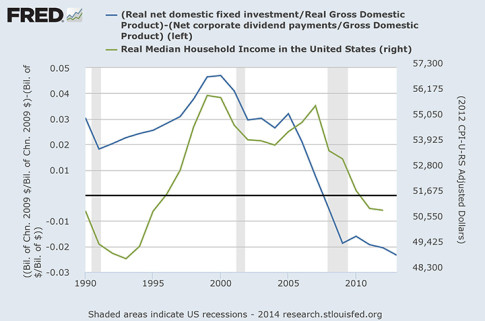 And again we find significant support for our theory. One can see simply by looking at the chart there is a strong correlation between the reallocation from fixed capital investment to financial markets and median household incomes. Specifically, as we move away from fixed capital investment we see a decline in real median household incomes. As a note, I regressed these functions as well and although not as strong as the M2 regression I found statistical significance and good explanatory properties.

There appears to be material quantitative support for the theory, but what does it all mean and how does it all work? Fixed capital investments are required to sustain long term economic growth. Without it capacity deteriorates. As capacity deteriorates jobs go away. As jobs go away demand goes away. As demand goes away we circle back to more capacity reductions and the problem becomes circular. And so it begs the question, why did the Fed implement such a flawed strategy? The answer is because it worked in the past.

What the Fed overlooked was that between the crash in 2001 and the latest crash the Fed decided to be more transparent in its activities. They did this in hopes of being able to steer market behavior to some degree. This resulted in a very different message than in the past. This time we all knew the Fed was targeting higher stock prices. This is something that was perhaps assumed in the past but not made explicit. That made all the difference in the world.

Without the Fed targeting higher stock prices the market is still a very risky investment and corporations will be more inclined to stick with their area of expertise. In effect, they will invest in their own operations rather than risk shareholder funds in risky financial markets. Remember the Fed was also targeting lower borrowing costs by way of interest rates. And so companies could borrow cheap money to invest, however, this time the borrowed funds went to the financial markets rather than job creating investments.

The Fed’s strategy of targeting higher stock prices to boost economic growth has done the exact opposite. This strategy has pulled money away from effective macroeconomic investments and into ineffective macroeconomic albeit effective short term microeconomic investments. The end result is that we have all time high stock prices but no economic growth. This is exactly what our theory predicted would happen.

Now in economic terms these are all sunk costs, incredibly high sunk costs, but sunk costs nonetheless. The right course of action at this time is to admit the Fed’s strategy failed and to implement a new strategy that aligns both microeconomic and macroeconomic incentives. Whether this will happen is looking doubtful.

We continue to hear Fed Chair Janet Yellen indicate the economy is not yet healthy enough to stand on its own and so they will have to continue with the current strategy until it gets healthier. Given our discussion above, we know that this will never work.  We will be stuck in this economic lull until the Fed is ready to admit defeat and allow for a new more effective strategy to be implemented.