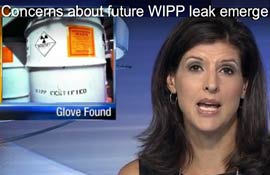 – Reuters: Investigation suggests another drum with plutonium ruptured at US nuclear site — TV: “There are new concerns at WIPP that there could be another radiation leak” (VIDEO) (ENENews, Sep 19, 2014):

Joe Franco, DOE official, Sept. 18, 2014 (at 41:00 in): “As you probably heard… there’s been some items about a 2nd drum in Panel 6… We’ve taken into consideration, that what if we had that event again while our folks are in the underground… What’s come out insinuates that we have another potential drum… We’re taking things seriously.” >> Watch video here

Reuters, Sept. 19, 2014 (emphasis added): Second container possibly leaked at New Mexico nuclear dump — A second container of plutonium-contaminated debris may have contributed to a radiation leak [at New Mexico’s Waste Isolation Pilot Plant] a U.S. Energy Department official said on Thursday…. “What has come out insinuates we have another potential drum,” Joe Franco, manager of the Energy Department field office in Carlsbad that oversees the plant, told a public meeting. Franco said further investigation of the underground suggests the rupture of an additional barrel of nuclear waste…

KRQE, Sept 18, 2014: Concerns about future WIPP leak emerge… new concerns at WIPP that there could be another radiation leak >> Video here

Albuquerque Journal, Sept. 18, 2014: Concern over another WIPP drum… State Sen. Peter Wirth… said there’s also concern that the WIPP area where the… drum is stored has not been sealed and that the Department of Energy has not presented a promised “recovery plan” for cleaning up WIPP

Santa Fe New Mexican, Sept. 18, 2014: “It’s concerning that… the problem was presented to us as one drum,” said state Sen. Peter Wirth, D-Santa Fe… “Now the scope being represented by the lab involves more high-risk drums.”… 16 drums [contain] disturbing mixtures of waste… Twelve of the drums containing waste identified as high risk are at WIPP — 11 of them in Panel 6 [– which includes the] waste container… identified as a potential powder keg… [That panel] cannot be immediately accessed in a way that ensures radiation will not escape.

Carlsbad Current Argus, Sept. 16, 2014: “I cannot guarantee that second drum won’t go” [ LANL official Terry Wallace] said… “kitty litter and nitric acid… requires very high temperatures to initiate that, just like we had talked about at the World Trade Center… [Reactions] could have heated this drum up to the point where you would begin to have a reaction with the [litter].”

Terry Wallace, LANL official, Aug 15, 2014 (at 6:45 in): The [breached] drum was originally white, it’s now black … it was exposed to very high temperatures… The World Trade Center… came down [because of burning] paper that was contained within the filing cabinets, and that allowed temperatures to reach 1,200-1,300ºC. We worry about the same kinds of thing in drums — can you have a series of reactions? >> Watch video here

Los Alamos Monitor, Aug 22, 2014: Records about [the nitric acid] process were handwritten and LANL cannot say with certainty whether some of the drums were fully neutralized.

1 thought on “Reuters: Investigation suggests another drum with plutonium ruptured at US nuclear site — TV: “There are new concerns at WIPP that there could be another radiation leak””