Given that all the leading candidates for Global Hegemon are hastening down paths of self-destruction, perhaps there will be no global hegemon dominating the 21st century.

Which nation with aspirations of global dominance (i.e. hegemony) has these attributes?

1. The nation’s recent prosperity is based on a vast expansion of credit.

2. The nation has 100+ million obese/diabetic citizens.

3. The citizens have little say over central government policies that favor cronies.

5. Large regions of the nation suffer from chronic water shortages.
Hmm, sounds like the U.S. is a match so far…. Let’s add a few more attributes:

6. The nation’s credit expansion has relied on a largely unregulated shadow banking system.
7. The nation is in the midst of an unprecedented housing bubble.

This could still be the U.S., but America’s unprecedented housing bubble popped in 2006–the current bubble is a mere echo bubble. Let’s add a few more attributes:

8. The nation is beset with unprecedented “external” environmental costs as a result of rapid and largely unregulated industrialization.

9. The nation suffers from large-scale desertification.

10. Over half the nation’s monied Elites have either left the nation or plan to leave and transfer their financial wealth overseas.

The only nation with aspirations of global hegemony that fits all these attributes is China. The conventional China Story holds that the 21st century will be China’s century, much like the 20th century was America’s.

But this story overlooks the vast demographic, health, environmental and financial problems built into China’s land, people, and Central-Planning systems of finance and governance.

Consider two charts drawn from John Hampson’s recent overview of Problems in China:
China’s shadow banking system, which provided the majority of the credit that fueled the current expansion, is imploding: 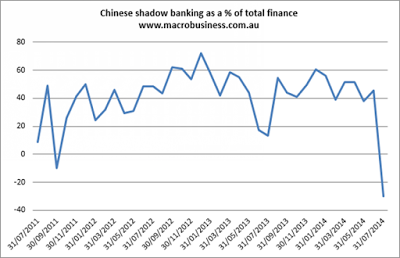 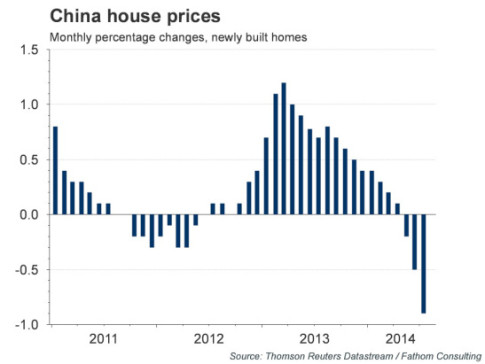 China’s system allows only a limited number of options for savings and investment; other than bank accounts that have lost money when real inflation is accounted for, the primary option available to households is real estate. As a consequence, an enormous percentage of the nation’s household wealth has been sunk into empty apartments which act as “savings.”

But a physical flat in a high-rise building is not a financial asset like a savings account: it is a physical object that degrades with time and whose value is set by supply, demand and thr availability and cost of credit.

If the building is not maintained properly, elevators break down, pipes start leaking and fixtures corrode, and the value of an unmaintained building drops to zero in terms of habitability within a decade or so.

100 million apartments become an enormous mal-investment of one-time wealth as they slowly become uninhabitable due to poor construction and/or maintenance.

China has been building infrastructure at a break-neck pace for 30 years, and this has created the mindset that almost every structure will be torn down and replaced with something grander every 20 years or so.

As a result of this mindset, very few structures are maintained. Why bother if it will be torn down and replaced a few years down the road?

But tens of millions of apartments cannot replaced every decade or two.

Few promoters of the China Hegemony-in-the-21st-century Story mention the estimated 114 million people in China with diabetes–over one third the population of the U.S.– or the roughly 500 million people in China with elevated blood-sugar levels that put them at risk of developing diabetes or related lifestyle diseases. China ‘Catastrophe’ Hits 114 Million as Diabetes Spreads.

How much of the nation’s surplus wealth will be devoted to fixing the environmental and health costs that are already visible? How much of the wealth is actually phantom wealththat will vanish as the housing bubble based on an unprecedented credit bubble pops?

The China Story based on demographics, health, environmental damage and financial Central Planning is a quite different one from the China will be the global hegemon in the 21st century story. Given that all the leading candidates for Global Hegemon are hastening down paths of self-destruction, perhaps there will be no global hegemon dominating the 21st century.

1 thought on “Which Global Hegemon Is on Shifting Sands?”