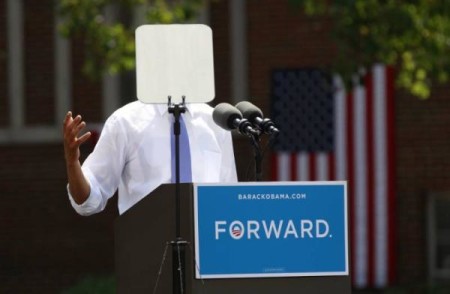 After infamously flip-flopping not only on interventionist US foreign policy, where he first promised no US troops would operate in Iraq only to see nearly 1000 marines “augmenting diplomatic security in Iraq“, but his core Iraq mandate, having fought tooth and nail against the Bush legacy of Iraq engagement only to see himself mired deep in a land war in the middle east, resulting in this humiliating headline fiasco, now it is Obama’s turn to boldly cross yet another red line, this time on immigration politics.

The reason Obama was “forced” to warn of even more executive action bypassing Congress: “the republicans’ fault.”

So fast forward two months and it turns out there will be a delay, and a substantial one at that, because earlier today Obama said he will wait until after the November midterm elections to announce any action on immigration reform, drawing criticism from Republicans who accused the president of playing political games. Even NBC observes the now constant flipflop, commenting that “the announcement Saturday reverses a statement Obama made in June when he ordered his team to suggest executive actions he could take to stem deportations by the end of the summer.”

What was the official party line for the delay? From the NYT:

[A]dvisers to Mr. Obama believe that an announcement before the midterm elections in November would inject the already controversial issue into a highly-charged campaign environment that would force members of both parties to take extreme positions.

“Because of the Republicans’ extreme politicization of this issue, the president believes it would be harmful to the policy itself and to the long-term prospects for comprehensive immigration reform to announce administrative action before the elections,” a White House official said. “Because he wants to do this in a way that’s sustainable, the president will take action on immigration before the end of the year.”

Administration officials insist that Mr. Obama is more determined than ever to take action — eventually. But the president and his top aides have concluded that an immigration announcement before November could anger conservatives across the country, possibly cripple Democratic efforts to retain control of the Senate and severely set back any hope for progress on a permanent immigration overhaul.

Politics aside, what is the real reason for Obama’s flipflopping?

The president’s pledge in June had committed him to acting in the weeks before the midterm elections, when a half-dozen Democratic senators must face the voters. Sensing a potentially powerful issue, Republicans have repeatedly accused Mr. Obama of preparing to usurp power from Congress and of wildly overstepping the authority of his office.

As the election draws closer, nervous Senate Democrats in Arkansas, Louisiana, North Carolina and Alaska had told White House officials that Mr. Obama’s actions could cost them victory at the polls. Those conversations culminated in the decision to delay immigration action.

In other words: when it comes to preserving the democratic majority in the Senate, all of Obama’s populist rhetoric and appeals to the masses promptly fade into the background. Which is to be expected: after all Obama is nothing more than a consummate figurehead – he has never been for actually taking important decisions; in fact, lately the president’s most important daily decision is whether to use a 3 or 5 Wood.

Finally, it was not only republicans who were angry: one of the biggest democratic voter constituencies was hardly pleased:

Cristina Jimenez, the managing director for United We Dream, an immigration advocacy group, accused Mr. Obama of “playing politics” with the lives of immigrant families and said “the president’s latest broken promise is another slap to the face of the Latino and immigrant community.”

Our advice to the Latino and immigrant community: get yourself a bank, load it up with a few hundred billion in deposits and toxic loans, and a few hundred trillion in derivatives, spend a few hundred million per year on purchasing Congressional muppets, and then you too will be calling the shots. Until then, prepare to be nothing but the lowest common denominator in the TOTUS/GOTUS’ populist fodder.