– Icahn, Soros, Druckenmiller, And Now Zell: The Billionaires Are All Quietly Preparing For The Plunge (ZeroHedge, Sep 3, 2014):

“The stock market is at an all-time, but economic activity is not at an all-time,” explains billionaire investor Sam Zell to CNBC this morning, adding that, “every company that’s missed has missed on the revenue side, which is a reflection that there’s a demand issue; and when you got a demand issue it’s hard to imagine the stock market at an all-time high.” Zell said he is being very cautious adding to stocks and cutting some positions because “I don’t remember any time in my career where there have been as many wildcards floating out there that have the potential to be very significant and alter people’s thinking.” Zell also discussed his view on Obama’s Fed encouraging disparity and on tax inversions, but concludes, rather ominously, “this is the first time I ever remember where having cash isn’t such a terrible thing.” Zell’s calls should not be shocking following George Soros. Stan Druckenmiller, and Carl Icahn’s warnings that there is trouble ahead.

On Stocks and reality…

“People have no place else to put their money, and the stock market is getting more than its share. It’s very likely that something has to give here.”

“I don’t remember any time in my career where there have been as many wildcards floating out there that have the potential to be very significant and alter people’s thinking,” he said. “If there’s a change in confidence or some international event that changes the dynamics, people could in effect take a different position with reference to the market.”

“It’s almost every company that’s missed has missed on the revenue side, which is a reflection that there’s a demand issue,” he said. “When you got a demand issue it’s hard to imagine the stock market at an all-time high.”

He also lamented about how difficult it is to call a market top. “If you’re wrong on when, that’s a problem.” His answer: “You got to tiptoe … and find the right balance.”

“This is the first time I ever remember where having cash isn’t such a terrible thing, despite the fact that interest rates are as low as they are,” he added.

On Obama and inequality…

“Part of the impact of these very, very low interest rates is that we’ve creating this disparity. The wealthy are benefiting from government policy and the nonwealthy aren’t,” he continued. “So we have a president who says we’ve got to fight this disparity and we have a Fed who’s encouraging it everyday.“

“This is both legal and accepted. If the government doesn’t like the result, change the law,” he said. “You have to have a rational tax policy.” He said the top tax rate should be changed and the U.S. should not tax worldwide income.

Zell also said it’s unfortunate that “this inversion thing has been captured as a political, electioneering item.”

Soros has once again increased his total SPY Put to a new record high of $2.2 billion, or nearly double the previous all time high, and a whopping 17% of his total AUM. 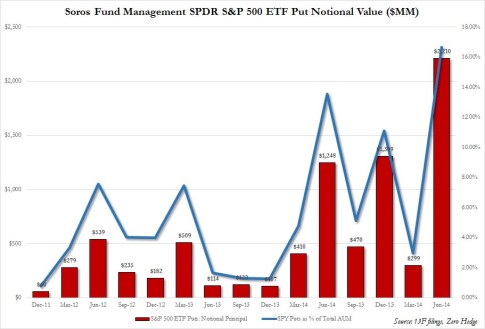 Ironically, Carl Icahn – poster-child of the leveraged financial engineering that has overtaken US equity markets on the back of Central Bank largesse – told CNBC that he was “very nervous” about US equity markets. Reflecting on Yellen’s apparent cluelessness of the consequences of her actions, and fearful of the build of derivative positions, Icahn says he’s “worried” because if Yellen does not understand the end-game then “there’s no argument – you have to worry about the excesssive printing of money!”

Simply put, Druckenmiller concludes, rather ominously, “I am fearful that today our obsession with what will happen to markets and the economy in the near term is causing us to misjudge the accumulation of much greater long term risks to our economy.”

And here the BIS explains broken markets so easily, even a Janet Yellen can get it:

Growth has picked up, but long-term prospects are not that bright. Financial markets are euphoric, but progress in strengthening banks’ balance sheets has been uneven and private debt keeps growing. Macroeconomic policy has little room for manoeuvre to deal with any untoward surprises that might be sprung, including a normal recession.

So now we have a quorum of billionaires and the BIS all flashing warning signals which can only mean one thing: stocks are undervalued so buy, buy, buy…