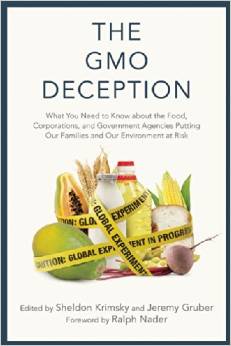 @Amazon.com: The GMO Deception: What You Need to Know about the Food, Corporations, and Government Agencies Putting Our Families and Our Environment at Risk Price: $16.85

@Amazon.co.uk: The GMO Deception: What You Need to Know About the Food, Corporations, and Government Agencies Putting Our Families and Our Environment at Risk Price: £14.72

Sheldon Krimsky is no stranger to the evolution of genetic testing and manipulation. In fact, he’s authored and co-authored dozens of books on a range of topics including industrial genetics, hormone mimickers, corrupt biomedical research and why the public needs a “Genetic Bill of Rights.”

Krimsky, a professor of Urban and Environmental Policy and Planning at Tufts University in Massachusetts, has dedicated his career to analyzing the relationship between agricultural biotechnology and the environment.

His latest book entitled, The GMO Deception: What You Need to Know about the Food, Corporations, and Government Agencies Putting Our Families and Our Environment at Risk, discusses genetically engineered foods and the long-term effects that they have on people’s health and the environment.gmo

A preview of his book on Amazon discusses his reaction to his college biology professor’s allegation that “science is science,” a statement that Krimsky highly disagrees with. “Today, my response would be ‘not quite,'” wrote the author.

Krimsky is head of the Council for Responsible Genetics, a public interest group that “fosters public debate about the social, ethical and environmental implications of genetic technologies,” according the group’s website.

Weintraub quickly began questioning Krimsky about his apparent “anti-GMO position,” asking whether or not he’s truly opposed to them or just skeptical.

Krimsky cleverly rebutted by explaining that one of the core values of science is “organized skepticism,” and the only way to truly test science is by being skeptical, exploring every possible fault until the skepticism disappears.

When Krimsky addressed the U.S. Food and Drug Administration’s (FDA) failure to test the safety of GMOs, instead working a backward approach asking industry to report problems after they have occurred, Weintraub asked if he disagrees with that approach.

“You cannot predict what’s going to happen to an organism if you put in a foreign gene. It could interfere with other genes, it could over-express some things and under-express other things. You cannot make predictions without testing them,” explained Krimsky.

Weintraub responded by questioning whether or not a company can control where a gene goes or what it does after insertion.

“Genes do more than one thing. If you think of the genome as an ecosystem rather than a Lego system, it gives you a different idea of what the possibilities are. We have to test in order to understand what the foreign gene is going to do to the organism,” said Krimsky.

He explained the difference between cross-pollination and genetic engineering, clarifying that hybrid crops come from the same species, while GM crops involve inserting genes from a completely different species and placing them into a plant genome.

Unsatisfied, the interviewer began referencing industry studies that regard GMOs as safe and no different from ordinary crops. Scientists that question the corporate narrative are often “vilified,” replied Krimsky, and not all studies have proven GMOs to be safe.

Krimsky discussed the criticism that French scientists received after publishing research which found GMOs to cause “severe adverse health effects” in mice, including the development of mammary tumors and organ damage.

After calling the French study “unrealistic,” Weintraub asked, “So this one negative finding carries more weight than dozens of positive ones?”

“Whenever you’re looking at the risk of a product, a single negative result is more important than 99 positive results, especially when a substantial number of those positive results are funded by the agribusiness industry. We’ve had products on the market for 50 years: PCBs, asbestos, tobacco, DDT. Early on people said they were safe,” answered Krimsky.

Weintraub wrapped up the interview by asking if anything would convince Krimsky that GMOs are safe.

“I would feel convinced if there were independent studies asking the right questions and seeking experiments looking for the most vulnerable cases,” he replied.

A reprint of the interview by GMWatch corrected a few of Weintraub’s points, including that there was nothing “unrealistic” about Seralini’s long-term safety study on GM maize NK603 and Roundup.

Secondly, regarding Weintraub’s comment about one negative study carrying more weight than dozens of positive ones, GMWatch points out that there are no other long-term safety studies on GM corn.