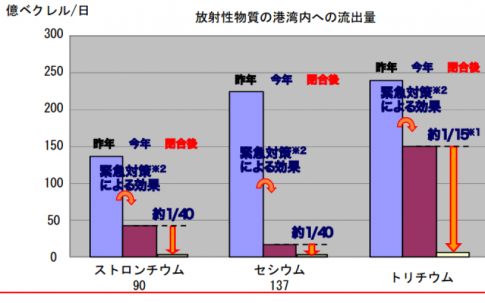 Following up this article.. 5 Billion Bq of Strontium-90 flows to the sea every single day [URL]

15 Billion Bq of Tritium flows from Fukushima plant area to the sea every single day. Tepco reported it in the handout submitted to Fukushima fishery cooperative on 8/25/2014.

In the press conference of the same day, Tepco announced it was 1 Billion Bq, which is 1/15 times much as the actual amount.

It is not clear if Tepco tried to under-report it intentionally or not. Tritium cannot be removed by any of the purification systems of Tepco.