Despite border closures, flight bans, cordoning off the sick (and healthy), and rubber (and live) bullets and tear gas on ‘protesters’; the world’s worst outbreak of Ebola just keeps spreading, now to a sixth African nation. Just day after Congo (5th nation) reported cases of Ebola, as The BBC reports, Senegal’s health minister confirmed the first case of Ebola in his nation yesterday and Bloomberg confirms 20 more people are “under surveillance.” Meanwhile, in Guinea a Red Cross official said riots had broken out in the nation’s 2nd largest city over rumors that health workers had infected people with the virus; and Nigerians are protesting plans to build isolation units in some local clinics. “contained” 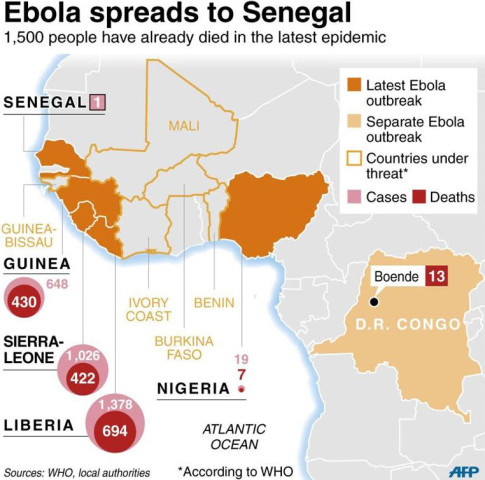 As The BBC reports, Senegal had tried to block this…

Senegal had previously closed its border with Guinea in an attempt to halt the spread of Ebola, but the frontier is porous.

It had also banned flights and ships from Guinea, Liberia and Sierra Leone – the three worst-hit countries.

Awa Marie Coll Seck told reporters on Friday that a young man from Guinea had travelled to Senegal despite having been infected with the virus.

The man was immediately placed in quarantine, she added.

In Guinea, a 24-hour curfew has been imposed in the second city, Nzerekore, because of a riot after the main market was sprayed with disinfectant in an attempt to halt the spread of the virus.

The exact cause of the riot is not clear – some people reportedly feared the spray would spread Ebola, while other chanted: “Ebola is a lie”. Police responded by firing tear gas.

“A rumor, which was totally false, spread that we had sprayed the market in order to transmit the virus to locals,” Traore said. “People revolted and resorted to violence, prompting soldiers to intervene.”

The city is the capital of the Forest Region, where the Ebola epidemic has its epicentre – near the town of Gueckedou.

However the BBC’s Alhassan Sillah in Guinea says the town has miraculously remained free of Ebola so far.

And Nigerians are not happy…

In Nigeria, meanwhile, some have pushed back against government plans to build isolation units in their neighborhoods, even saying they would sooner burn Ebola centers down than allow them to operate.

In the northern city of Kaduna, hundreds of people on Wednesday protested plans to convert sections of a local clinic into an Ebola treatment center. Many carried signs that said: “No Ebola in our hospital.”

*  *  *
Much worse than expected and is crushing Africa’s GDP…